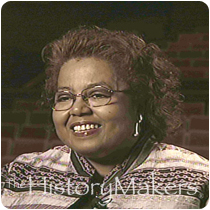 See how Marjorie Moon is related to other HistoryMakers

Theatre producer and director Marjorie Moon was born on May 14, 1946, in Kokomo, Indiana. For over thirty years, Moon served as the President and Executive Director of the Billie Holiday Theatre in Brooklyn, New York. Moon’s passion for theater began early as she spent time at the Karamu House Theater in Cleveland, Ohio. In 1964, Moon received her diploma from Collinwood High School; around the same time, she became one of the youngest members in the Cleveland Women’s Orchestra. In 1968, Moon earned her B.A. degree from Ohio University and went on to complete her studies at Temple University in 1970 with an M.A. degree.

Moon began her professional career teaching acting at Hampton University. Moving to New York in 1973, Moon became the Executive Director of the Billie Holiday Theatre in Brooklyn, a theatre that has provided African American playwrights, set-builders, and other creative individuals an arena to work and nurture their talents.

As a director, Moon has worked on several plays, including Weldon Irvine’s Young, Gifted and Broke, which ran for eight months and won four prestigious AUDELCO Awards. Moon also directed a production of Over Forty at the New Freedom Theatre in Philadelphia. As a producer, Moon produced more than 150 productions. In 1981, Inacent Black, a play originally produced at the Billie Holiday Theatre, opened on Broadway, starring Melba Moore.

Moon received several awards for her work in the Bedford-Stuyvesant section of Brooklyn, New York. In 2005, the Billie Holiday Theatre received a $900,000 grant for its line-up of new plays.

See how Marjorie Moon is related to other HistoryMakers
Click Here To Explore The Archive Today!