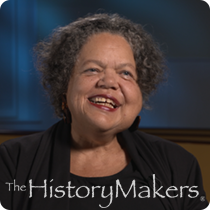 See how Marita Rivero is related to other HistoryMakers
Donate Now

Media and nonprofit executive Marita Rivero was born on November 25, 1943 in West Grove, Pennsylvania to Grace Beresford Hughes Rivero and Manuel Rivero. Her parents worked at Lincoln University in Chester County, Pennsylvania, where her mother taught English and Latin, and her father was the founding chairman of the university’s physical education department, as well as a coach for nearly four decades. Rivero attended Tufts University in Medford, Massachusetts, earning her B.S. degree in psychology in 1964.

In 1970, Rivero became a producer at WGBH, a National Public Radio member station in Boston, Massachusetts. She moved to Washington, D.C. in 1976 to work as a consultant for PBS, the National Science Foundation, and the Communications Task Force of the United States Congressional Black Caucus. Rivero returned to radio production in 1981 as general manager of WPFW Pacifica in Washington, D.C., where she was later promoted to vice president. She remained there until 1988, when she returned to Boston as general manager of WGBH Radio. In 1998, Rivero was hired as executive-in-charge of Africans in America: America’s Journey Through Slavery. She then served as executive-in-charge of This Far By Faith, which aired in 2003. Rivero was promoted to general manager of radio and television at WGBH in 2005, a position she held until 2013. In 2015, Rivero was named executive director of the Museum of African American History, Boston and Nantucket, where she had volunteered since the late 1980s.

Rivero was honored with several awards including a 2007 Pinnacle Award for Achievement in Arts & Education from the Greater Boston Chamber of Commerce; the first Image Award for Vision and Excellence from Women in Film and Video/New England; and induction into the YWCA's Academy of Women Achievers. She served as board chair of the National Trust for Historic Preservation, chair of the National Black Programming Consortium (NBPC), and chair of the National Association of Community Broadcasters. She also served on the boards of NPR, The Partnership, the Kokrobitey School of Ghana, and the Urban League of Eastern Massachusetts, as well as the boards of the Dimock Community Health Center, the Institute of Contemporary Art, Partners Healthcare and the YWCA.

Marita Rivero was interviewed by The HistoryMakers on October 19, 2016.

See how Marita Rivero is related to other HistoryMakers
Donate Now