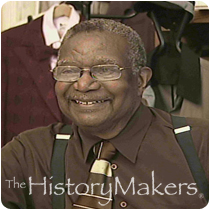 See how Marion Anderson is related to other HistoryMakers
Donate Now

After refining his skills at the American Gentleman School of Designing, he started teaching at the Empire Trade School, a school that catered to African American World War II veterans. In 1956, Anderson began instructing prisoners in the tailor shop on Rikers Island. Four years later, he convinced the New York City Board of Education to create a tailoring curriculum, and he was hired at Sterling High School in Brooklyn, New York, where he would teach tailoring for thirty-three years. Anderson was the first African-American to be licensed by the City of New York to teach tailoring.

In 1987, Anderson founded his own school, the Manhattanville Needle Trade School, in Harlem. In 2007, Anderson celebrated his twentieth year as the director at the school. During his lengthy career, he tailored suits for many members of the Harlem elite, and taught a valuable trade to hundreds in Harlem and New York City.

See how Marion Anderson is related to other HistoryMakers
Donate Now
Click Here To Explore The Archive Today!