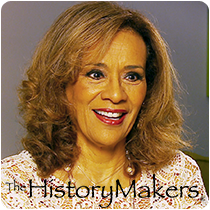 See how Marilyn McCoo is related to other HistoryMakers
Donate Now

Singer and actress Marilyn McCoo was born on September 30, 1943 in Jersey City, New Jersey. Her parents, Mary and Waymon McCoo, were both doctors and moved the family to Los Angeles, California when McCoo was seven years old. She graduated from Dorsey High School and went on to attend the University of California-Los Angeles, where she received her B.S. degree in business administration.

In 1962, McCoo entered the Miss Bronze California beauty pageant where she won the Grand Talent award and met Lamonte McLemore, who asked her to join his singing group, the Hi-Fi’s. She went on to perform with Ray Charles and record the single "Lonesome Mood." The Hi-Fi’s disbanded in 1965, and that same year McCoo, McLemore, Florence LaRue, Ron Townson, and Billy Davis, Jr. formed The Versatiles. The group signed to the Soul City label, changed their name to The 5th Dimension, and recorded their first hit in 1966, "Go Where You Wanna Go." In 1967, they released “Up, Up, and Away,” which won four Grammy Awards and was the title track to the 5th Dimension's first hit album. In 1969, The 5th Dimension released The Age of Aquarius. The album's first single, "Aquarius/Let the Sunshine In," became a mega-hit and occupied the number one spot on the charts for six weeks. It earned the group two more Grammy Awards, including Record of the Year.

In 1969, McCoo married bandmate Billy Davis, Jr., and in 1975, they left The 5th Dimension. Together, they released 1976's I Hope We Get To Love In Time, featuring the single, "You Don't Have to Be a Star (To Be in My Show)." The song went straight to number one on the Billboard Hot 100 and earned the duo a Grammy Award for Best R&B Performance by a Duo, Group or Chorus. McCoo and Davis went on to host The Marilyn McCoo & Billy Davis Jr. Show on CBS in 1977. In the 1980s McCoo hosted the music countdown show Solid Gold. She also had a recurring spot on the soap opera Days of Our Lives in the 1980s, and acted in a number of movies. She appeared on stage in productions of Anything Goes, A...My Name is Alice, Man of La Mancha, and the Broadway production of Show Boat.

McCoo released a solo album, Solid Gold, in 1983, and then a gospel album in 1991 entitled The Me Nobody Knows; its title single went to number one on the gospel charts. She received another Grammy Award the following year for participating as a guest artist on Quincy Jones’ Handel’s Messiah: A Soulful Celebration, which won Best Contemporary Soul Gospel Album. In 2004, McCoo and Davis co-authored the book Up, Up and Away…How We Found Love, Faith and Lasting Marriage in the Entertainment World.

McCoo has also earned a star on the Hollywood Walk of Fame, and The 5th Dimension was inducted into the Vocal Group Hall of Fame in 2002. She has received two honorary doctorate degrees and served on the boards of the Children's Miracle Network, the Los Angeles Mission, and the Cancer Research Foundation.

Marilyn McCoo was interviewed by The HistoryMakers on July 29, 2014.

See how Marilyn McCoo is related to other HistoryMakers
Donate Now
Click Here To Explore The Archive Today!