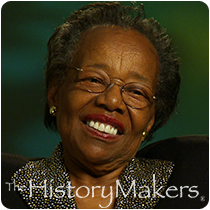 Favorite Time of Year:
Fall, Spring
Favorite Quote:
Take What You Got And Make What You Want Out Of It.$

Favorite Time of Year:
Fall, Spring
Favorite Quote:
Take What You Got And Make What You Want Out Of It.$

See how Marie Dixon is related to other HistoryMakers

Nonprofit executive Marie Dixon was born on August 1, 1937 in Oxford, Mississippi. Her mother was Amelia Booker and her father was Fred Booker. Dixon comes from a family of fourteen brothers and sister. Her family had deep roots in Oxford, as both of her parents were born and raised there. Dixon attended New Hope, the school at her local church in Oxford, and then Oxford Training School. Then, in 1954, Dixon left Oxford and moved to Chicago.

Dixon first worked in retail and attended the Red Cross School in order to become a nurse. Then, in 1956, Dixon met the legendary blues musician, producer, and her future husband, Willie Dixon. In the late 1970s, Willie had a vision for a blues foundation, and, in 1984, he established the organization as the “Blues Heaven Foundation,” a non-profit designed to promote the blues and to provide scholarships, royalty recovery advice, and emergency assistance to blues musicians in need. After her husband’s death in 1992, Dixon purchased the building of the legendary Chess Studios in Chicago in 1993 in order to house the Blues Heaven Foundation. She then went on to serve as the foundation’s president. Through the efforts of Dixon, her daughter Shirli, and others, the Blues Heaven Foundation and museum finally moved into the restored Chess Studios in 1997.

In 2003, after her daughter Shirli’s untimely death, Dixon’s other daughter, Jacqueline, joined in order to help in running the Blues Heaven Foundation as the new executive director. In 2012, Sugar Blue, a famous blues harmonica player, presented Dixon with the Blues and Spirit Award at the third biennial Blues and the Spirit symposium held at Dominican University in River Forest, Illinois. Then, in 2013, she was honored with the Willie Dixon’s Legendary Blues Artist induction, as well as the induction of the Willie Dixon Blues Heaven Foundation, into the Chicago Blues Hall of Fame. Dixon’s Blues Heaven Foundation provides an annual Muddy Waters Scholarship to a full-time Chicago college student studying music, African American studies, history, journalism, or a related field. The foundation also sponsors and performs harmonica workshops.

Marie Dixon was interviewed by The HistoryMakers on August 25, 2013.

See how Marie Dixon is related to other HistoryMakers
Click Here To Explore The Archive Today!