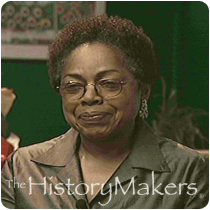 See how Marie Brown is related to other HistoryMakers

Literary agent and publishing consultant, Marie Dutton Brown was born on October 4, 1940 in Philadelphia, Pennsylvania to Josephine and Benson Dutton. Brown attended a Catholic elementary school and a public high school. She graduated from Germantown High School in 1958 and went on to Penn State University where she received her B.S degree in 1962.

Brown became a teacher for the Philadelphia Public School System in 1963. In 1965, as a multicultural coordinator, she helped to introduce multicultural education into the school system, which included African American history.

In 1967, Brown decided to take a different direction in her career. She took a position as a general publishing trainee at Doubleday Book Publishing in New York City, but in 1969, she married and relocated with her husband to California. There, from 1969 until 1972, Brown worked in bookstores and did freelance work. Then, she returned to New York City and to Doubleday Book Publishing as a senior editor.

Brown went on to become the Editor-In-Chief of Elan magazine in 1982 and sales manager and assistant buyer for Endicott Booksellers in 1984. At a time when publishers were no longer accepting unsolicited manuscripts, Brown decided to take her expertise and open her own literary agency, Marie Brown and Associates in Harlem, New York, becoming one of the few African American agents in the book world. Her agency provided marketing, promotions and consulting along with publishing. In 1990, Brown began to concentrate on book publishing because she cherished the idea of working creatively and developmentally with the authors. Brown has represented authors Beverly Guy-Sheftall, Randall Robinson, Dr. Johnetta Cole, Susan Taylor and Van Whitfield.

Brown is on the Board of Directors of the Caribbean Cultural Center, To Be Continued Kids Theater and Frank Silvera Black Theater.

Brown was interviewed by The HistoryMakers on January 8, 2007.

See how Marie Brown is related to other HistoryMakers
Click Here To Explore The Archive Today!