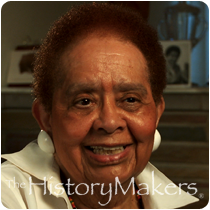 See how Marian Cullers is related to other HistoryMakers

Advertising executive Marian Barnett Cullers was born in 1927 in Webster Grove, Missouri. She graduated from Douglass High School in 1943 before attending Lincoln University in Jefferson City, Missouri. She transferred to the University of Illinois at Champaign in 1945 where she graduated with her B.A. degree. In 1946, Cullers married Vince Cullers, a graduate of the Chicago Art Institute and apprentice at Kling Studios in Chicago. The two opened an advertising art studio in 1947.

Frustrated with the lack of work, the Cullers opened Vince Cullers Advertising Agency, Inc. in 1956, the first black advertising agency in the United States. While her husband was behind the art, Cullers was in charge of office administration. Their first major national client came in 1968 with the Lorillard Tobacco Company who hired the Cullers to create a Newport cigarette campaign. That same year, the agency was chosen to market the Johnson Products Company’s Afro-Sheen product line. Cullers was named vice president of the agency and was a finalist for Chicago Advertising Woman of the Year. The firm was restructured in 1997 and dubbed “the oldest, newest African American ad agency.” In 2002, Cullers and her husband retired leaving their son Jeffrey to head the agency.

Marian Cullers was interviewed by The HistoryMakers on May 28, 2010.

See how Marian Cullers is related to other HistoryMakers
Click Here To Explore The Archive Today!