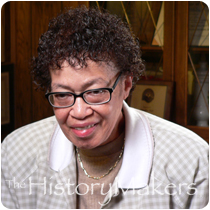 Omaha Star publisher Marguerita Le Etta Washington was born on August 16, 1948 to Anna Le Brown and attorney Edmund Duke Washington. Washington’s maternal great grandfather, the richest man in Bessemer, Alabama, left his fortune to his black daughter, her grandmother. The white relatives resolved the matter by burning down the Bessemer courthouse. Washington’s aunt, Mildred Brown, founded Omaha, Nebraska’s Omaha Star in 1938. Washington graduated from Kansas’ Lincoln High School in 1964, at the age of sixteen. Afterwards, she briefly attended Lincoln University in Jefferson City. She then went on to attend the University of Nebraska at Omaha where she earned her B.A. degree in sociology and elementary education. While earning her M.A. degree in administration and special education, Washington began teaching in the Omaha public schools. She earned her Ph.D. from the University of Nebraska - Lincoln in administration and instruction in 1985.

On November 2, 1989, Washington’s aunt, Mildred Brown, was laid to rest, and Washington became the Omaha Star’s new publisher. The Omaha Star has a circulation of 30,000 in Nebraska with a staff that is encouraged to be readers and critical thinkers. Regular contributions are made by Phyllis Hicks and State Representative Ernest Chambers. A community institution, the Omaha Star’s headquarters was recognized as a historical landmark designation in 2006, and under Washington’s leadership, a memorial will be created in honor of her aunt, Mildred Brown.

In 2005, the Omaha YWCA recognized Washington as one of the ten “Women of Vision.” In 2007, Washington formed the “Mildred D. Brown Memorial Study Center, Inc.,” in order to give young people the opportunity to study and research the history of African American journalism in Nebraska as well as getting hands on experience with a local newspaper.

Washington was interviewed by The HistoryMakers on October 5, 2007.

See how Marguerita Le Etta Washington is related to other HistoryMakers
Donate Now
Click Here To Explore The Archive Today!