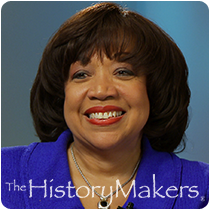 See how Margot Copeland is related to other HistoryMakers

Corporate executive Margot James Copeland was born on December 4, 1951 in Richmond, Virginia. She was the only child to her parents, Reverend William Lloyd Garrison James, a Baptist minister, and Thelma Taylor James, an eighth grade math teacher. Copeland earned her B.S. degree in physics from Hampton University, and her M.A. degree in educational research and statistics from The Ohio State University.

Copeland began her corporate career at Xerox Corporation, Polaroid, and Picker International. In 1992, she was hired as executive director for Leadership Cleveland, a program of the Greater Cleveland Growth Association that develops community leaders. After seven years at Leadership Cleveland, Copeland became president and CEO of the Greater Cleveland Roundtable, a nonprofit organization founded to improve multicultural and multiracial relations in the Cleveland area. She joined KeyCorp in 2001, and served as executive vice president - director, corporate diversity and philanthropy and as an executive council member. KeyCorp is one of the nation’s largest bank-based financial services companies and, within her position as chair and CEO of the KeyBank Foundation, she managed the company’s annual $20 million philanthropic investment program and oversaw diversity initiatives. KeyCorp has been included in DiversityInc magazine’s list of 50 Top Companies for Diversity in 2005, 2007, 2008, and 2009 and ranked 13th among the most generous cash giving companies in America in a 2003 list published by BusinessWeek. In 2013, the KeyBank Foundation was recognized as a Civic 50 Company by the National Conference on Citizenship, Points of Light and Bloomberg LP.

Copeland has participated in a number of community organizations and boards. In 2010, she became the fifteenth president of The Links, Inc. She has also served as the president of the Junior League of Cleveland, Inc., sat on the Kent State University board of trustees, acted as Mentor/Protégé Program Advisor for Morehouse College, and is a member of the Business School Advisory board at Hampton University.

Copeland was listed as one of the “100 Most Powerful Women in Cleveland” by New Cleveland Woman magazine, and in 2012, Savoy magazine included her in a list of the “100 Most Influential Blacks in Corporate America.” She is also the recipient of the YWCA Career Woman of Achievement Award; was the 2006 Black Professional of the Year as recognized by Black Professionals Association Charitable Foundation; received the Delta Sigma Theta Sorority Inc. Community Service Award; and the W.O. Walker Excellence in Community Service Award, sponsored by the Call and Post newspaper. Copeland also received the distinguished Alumnus of the Year Award in 2013 from Hampton University.

Copeland was interviewed by The HistoryMakers on February 10, 2014.

See how Margot Copeland is related to other HistoryMakers
Click Here To Explore The Archive Today!