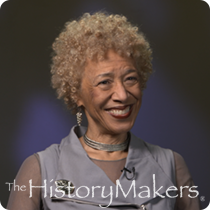 See how Margo Jefferson is related to other HistoryMakers
Donate Now

Professor and arts critic Margo L. Jefferson was born on October 17, 1947 in Chicago, Illinois, to Ronald and Irma Jefferson. Jefferson graduated from the University of Chicago Laboratory School in 1964. She earned her B.A. degree in English and American literature from Brandeis University in 1968, and went on to earn her M.S. degree from the Columbia University Graduate School of Journalism in 1971.

In 1973, Jefferson was hired as an associate editor for Newsweek magazine, where she worked until 1978. In 1979, she joined the Department of Journalism and Mass Communication at New York University as an assistant professor. Jefferson was hired as a contributing editor by Vogue magazine in 1984, where she wrote arts reviews and essays until 1989. She also served as a contributing editor to 7 Days magazine in 1988 and 1989. Jefferson returned to New York University as an assistant professor in 1989, where she taught critical writing and features until 1991, when she was hired as a lecturer of American literature, performing arts criticism, writing, and English at Columbia University. In 1993, Jefferson accepted a position at The New York Times as a book and arts critic. She was then promoted to Sunday theater critic in 1995, and became critic-at-large in 1996. She is a professor of writing at Columbia University, and has also served as a visiting associate professor at Eugene Lang College and The New School for Liberal Arts in New York City.

Throughout her career, Jefferson has been a contributing critic to many other publications, including Grand Street, The Nation, The New York Times Book Review, The Village Voice, Ms., The Soho Weekly News, Dance Ink, Lear’s, Harper’s, Alt, Denmark, and NRC Handelsblad. She has written and performed two theater pieces at The Cherry Lane Theatre and The Culture Project. Jefferson is also the author of On Michael Jackson, which was published in 2006. Her memoir Negroland, was published in 2015 and received the National Book Critics Circle Award for Autobiography in 2016, the Bridge Prize, the Heartland Prize and was short-listed for the Baillie Gifford Prize.

Jefferson was awarded the Pulitzer Prize for criticism in 1995, and has received the Alumni Achievement Award from Brandeis University and a Distinguished Alumni Award from the Columbia University School of Journalism. In addition, she was awarded a Guggenheim Fellowship and a Rockefeller Foundation /Theater Communications Group grant, and has served as a senior fellow for the National Arts Journalism Program.

Margo Jefferson was interviewed by The HistoryMakers on January 20, 2017.

See how Margo Jefferson is related to other HistoryMakers
Donate Now
Click Here To Explore The Archive Today!