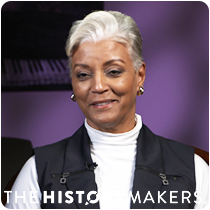 See how Margie M. Tuckson is related to other HistoryMakers

After graduation, she went to work for International Business Machines Corporation (IBM) in Mobile as product administrator, where she specialized in market analysis, product placement, internal and external executive training and product development. There, she was integral in the automation of the State of Georgia’s Department of Human Services-Child Support Services Program. She served in several management roles at IBM, and retired from the company after over eighteen years of service in 1991. Tuckson then worked as a consultant for a global aerospace and defense technology company Northrup Grumman in Los Angeles, California from 1991 to 1997. She also became the program manager for the City of Chicago Department of Cultural Affairs from 1997 to 2000. In 2013, Tuckson served as chief financial officer and manager for Tuckson Health Connections in Atlanta, Georgia.

Margie Tuckson was interviewed by The HistoryMakers on March 5, 2018.

See how Margie M. Tuckson is related to other HistoryMakers