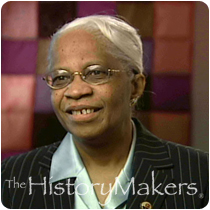 Favorite Color:
Purple
Favorite Time of Year:
Fall
Favorite Vacation Spot:
Rural Retreat, Virginia
Favorite Quote:
I Can Do All Things Through Christ That Strengthens Me.

Favorite Color:
Purple
Favorite Time of Year:
Fall
Favorite Vacation Spot:
Rural Retreat, Virginia
Favorite Quote:
I Can Do All Things Through Christ That Strengthens Me.

See how Margaret Peters is related to other HistoryMakers
Donate Now

Educator, African American history specialist, Margaret Peters was born March 12, 1936 in Dayton, Ohio. Her parents, Mary Margaret Smith Peters, and building contactor, Joseph Andrew Peters, were stalwarts of the National Association for the Advancement of Colored People (NAACP). Attending Irving School, Peters graduated from Dayton Roosevelt High School in 1954. At the University of Dayton, she earned a B.A. degree in 1959 and a B.S. degree in 1963. Peters also received her M.A. degree in 1972 and a supervisors certificate from the University of Dayton in 1974.

Peters began her teaching career at Roth High School in 1963. In 1968, as the black community continued agitated for African American history, Peters was appointed Black History Resource Teacher for the Dayton Public Schools. In 1969, she produced Striving to Overcome: Negro Achievers, which was published by Dayton Public Schools. Johnson Publishing released Peters’ Ebony Book of Black Achievement in 1970. She co-authored with her encyclopedic brother, Wendell Peters, the article “Blacks in Ohio History” in 1980. Her writing also includes numerous articles for the Dayton Weekly News, an African American newspaper, and since 1995, a column, “From The Root,” for the DaytonWeekly News culminating in a 1995 column called “From The Roots.” Also in 1995, the Donning Company published her treasury of African American history called Dayton’s African American Heritage, which has gone into an expanded edition. She was also co-editor of A History of Race Relations in the Miami Valley in 2001. Peters also served as instructor at Sinclair Community College and at Central State University West. Since retiring from Colonel White High School in 1993, she has served as coordinator of the free after-school tutorial program at Zion Baptist Church.

Peters was the recipient of the 1991 Excellence in Teaching Award for the Midwest Region from the National Conference of Negro Women; the National Education Association’s 1993 Dr. Carter G. Woodson Award; the 1993 Meritorious Award from the Southern Christian Leadership Conference and was their 2005 Education Breakfast speaker. From 1993 to 1995, she was elected to the National Executive Council of the Association for the Study of African American Life and History (ASALH). Peters is the recipient of many local awards including Dayton Public Schools’ Teacher of the Year in 1982 and the 2003 Lifetime Achievement Award from the Dayton Chapter of the National Forum for Black Administrators. Cited as one of Dayton’s Top Ten Women, Peters is a board member of the Dayton African American Legacy Institute, Inc. (DAALI) and has earned a block on Dayton’s Wright-Dunbar Walk of Fame.

See how Margaret Peters is related to other HistoryMakers
Donate Now
Click Here To Explore The Archive Today!