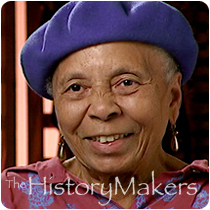 Artist, educator and institution-builder Margaret Burroughs was born on November 1, 1917 in Saint Rose, Louisiana. Always passionate about learning, Margaret moved north to Chicago in order to earn her Elementary Teacher's Certificate, which she received in 1937 from Chicago Normal College. She continued her education first at Chicago Teachers College, and later, at the Art Institute of Chicago, from which she earned her B.A. in Art Education in 1946 and her M.A. in 1948.

Dr. Margaret Burroughs made the first of her many contributions to African American arts and culture when she founded--at age 22--the South Side Community Art Center, a community organization that serves as a gallery and workshop studio for artists and students. Mrs. Burroughs continued to serve on the Board of Directors for the Center, which remained active more than sixty years after its formation.

During the mid-1950s Margaret Burroughs married Charles Burroughs, poet and founder of the Associated Negro Press. His organization, modeled on the Associated Press, played an important role in the coordination of African American newspapers throughout the United States. After extended travels together, the Burroughs' made the most well-known contribution to African American posterity in 1961 when they founded the DuSable Museum of African American History on the ground floor of their Chicago home. The museum, which has since moved to its own buildings in Chicago's Washington Park, has become an internationally recognized resource for African American art. DuSable Museum also hosts various educational programs and houses a permanent collection of more than thirteen thousand artifacts, artworks and books.

Although Margaret Burroughs worked in sculpture, painting, and many other artforms throughout her career, it was her exceptional skill as a printmaker that earned her a place within the history of art. For many years she worked with linoleum block prints to create images evocative of African American culture. Margaret Burroughs' work was featured in exclusive shows at the Corcoran Art Galleries in Washington D.C. and at the Studio Museum in New York. She served as art director for the Negro Hall of Fame and illustrated many books including What Shall I Tell My Children Who are Black?(1968). Mrs. Burroughs also published several volumes of her own poems, illustrated a number of children's books, and exhibited her own artwork all over the world. In 1975 she received the President's Humanitarian Award and in 1977 was distinguished as one of Chicago's Most Influential Women by the Chicago Defender. February 1, 1986 was proclaimed "Dr. Margaret Burroughs Day" in Chicago by late Mayor Harold Washington.

Burroughs was interviewed by The HistoryMakers on June 12, 2000.