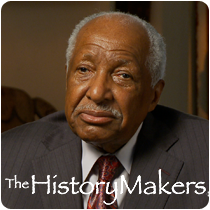 See how Marcus McCraven is related to other HistoryMakers
Donate Now

Electrical engineer Marcus R. McCraven was born on December 27, 1923 in Des Moines, Iowa to parents Marcus and Buena McCraven. After graduating from high school, McCraven enrolled at Howard University but was drafted into the U.S. Army during his first year of college. He was listed as an expert rifleman but went on to serve as a supply clerk with an engineering regiment in Papua, New Guinea and in the Philippines. Returning to the United States, McCraven continued his studies at Howard University and graduated with his B.S. degree in electrical engineering.

Upon graduation, McCraven was hired at the Naval Research Laboratory in Washington, D.C. After six months, he was promoted to electrical engineer and became the project leader of the Nuclear Systems Branch. McCraven soon moved to Lawrence Livermore National Laboratory in California where he worked on the hydrogen bomb. His area of expertise on the project was diagnostics and he was instrumental the early development of nuclear weapons, including nuclear tests on Bikini Island and in Nevada. McCraven then joined the research staff at the California Lawrence Radiation Laboratory; and, in the 1960s, he left California and moved to Connecticut where he began to work for Phelps Dodge. In 1970, he joined United Illuminating Co. as the director of environmental engineering and was later promoted to vice president.
McCraven has also served as trustee at Quinnipiac University in Hamden, Connecticut. In 2011, McCraven received an Honorary Doctorate of Humane Letters degree from Albertus Magnus College in New Haven, Connecticut.

Marcus McCraven was interviewed by The HistoryMakers on March 8, 2013.

See how Marcus McCraven is related to other HistoryMakers
Donate Now
Click Here To Explore The Archive Today!