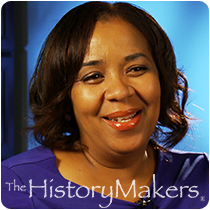 See how Marcia Sturdivant is related to other HistoryMakers

From 1987 to 1990, Sturdivant served as director of early education programs at the Urban League of Greater Pittsburgh. From 1990 to 1998, she worked in a number of positions at the Allegheny County Department of Human Services in the Office of Children, Youth and Families (OCYF), the second largest child welfare agency in the Commonwealth of Pennsylvania. In 1998, she was appointed deputy director of the Allegheny County Department of Human Services and administrator of the OCYF. Sturdivant was then named president and chief executive officer of the Negro Educational Emergency Drive (NEED) in 2013. She has also served as an assistant professor at Point Park University and an adjunct faculty member in the Graduate School of Social Work at the University of Pittsburgh.

Sturdivant is a past president of the Pittsburgh affiliate of the National Black Child Development Institute. She directs the Children’s Church and Children’s Choir at Nazarene Baptist Church in Pittsburgh, and has served as a board member of the American Association of Family Group Decision Making.

Sturdivant’s honors include the Three Rivers Youth Nellie Award for Community Leadership; the Urban League of Greater Pittsburgh’s Whitney M. Young Jr. Service Award and Ron Brown Civic Award; The YWCA of Greater Pittsburgh Racial Justice Award; and the National Association of Black Administrators in Child Welfare Valerie Bullard Award. She has been cited by Pittsburgh Magazine as one of “Forty Local, Gifted and Black African American Leaders,” and was recognized by the New Pittsburgh Courier as one of their 50 Women of Excellence in 2012. Sturdivant has also served as a repeat participant and research panelist of the Oxford University Educational Roundtable in Oxford, England.

She is married to Larry Anderson, Sr. and is the mother of two sons, Larry, Jr. and Marshall.

Marcia Sturdivant was interviewed by The HistoryMakers on June 8, 2014.

See how Marcia Sturdivant is related to other HistoryMakers
Click Here To Explore The Archive Today!