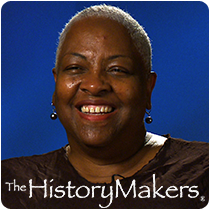 See how Marcia Lythcott is related to other HistoryMakers

Newspaper editor Marcia Lythcott was born on May 20, 1954 in Montgomery, Alabama. Her father, William Watkins, served in the U.S. Army; her mother, and Florence Watkins, a nurse’s aide. Both of her parents were avid readers. Lythcott’s mother used newspapers to introduce her and her sister, Pam, to politics. Some her favorite childhood novels and magazines were the Bobbsey Twins series, fairy tales, True Confessions magazine, Ebony and the Encyclopedia Britannica. After graduating from high school, both Lythcott and her sister attended the University of Wisconsin-Madison. Lythcott graduated from the University of Wisconsin-Madison with her B.A. degree in journalism.

Lythcott also served on the board member of the Louis Carr Internship Foundation. Her late husband, Stephen Lythcott, served as the vice president of the American Civil Liberties Union of Illinois until his death in 1994. Throughout the years, her favorite pastimes have been reading, traveling, gardening and ballet.

Marcia Lythcott was interviewed by The HistoryMakers on August 19, 2013.

See how Marcia Lythcott is related to other HistoryMakers
Click Here To Explore The Archive Today!