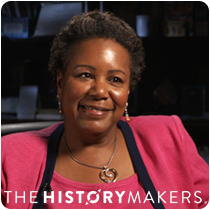 See how Marcheta Evans is related to other HistoryMakers

Academic administrator Marcheta Evans was born on July 10, 1959 in Mobile, Alabama to Sylvia Porter and James Luter. She graduated from H.D. Woodson High School in Washington, D.C. in 1976 and attended Oakwood University in Huntsville, Alabama and received her B.S. in psychology with a minor in history, a M.A. degree in rehabilitation counseling and her Ph.D. degree from the University of Alabama and M.A.Ed. degree in elementary education from the University of Alabama in Birmingham.

Evans joined the faculty at Auburn University in Montgomery, Alabama in 1993 and worked there until 1998, at which point she joined the University of Texas System. A year later, she became the program coordinator and graduate advisor for the counseling program at the University of Texas San Antonio (UTSA). In 2002, she founded the Women’s Resource Center at UTSA; and, in 2004, she was named chair of the counseling, educational psychology and adult and higher education department. During her time at UTSA, Evans contributed to the response to Hurricane Katrina and co-led an annual student re-enactment of the Freedom Rides. In 2008, she became provost fellow for the UT system. In 2013, Evans was appointed dean of the School of Professional Studies and the Worden School of Social Service at Our Lady of the Lake University in San Antonio, Texas. She also began serving as vice president of academic affairs at the institution. After three years in these positions, Evans was promoted to the position of provost of Our Lady of the Lake University.

Marcheta Evans was interviewed by The HistoryMakers on June 9, 2018.

See how Marcheta Evans is related to other HistoryMakers