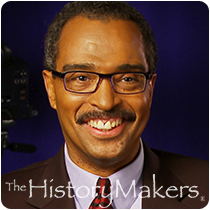 See how Marcellus Alexander, Jr. is related to other HistoryMakers
Donate Now

Television executive Marcellus Winston Alexander, Jr. was born on October 3, 1951 in Austin, Texas to Juanita Smith and Marcellus Alexander. In 1973, he graduated with his B.S. degree in speech and journalism from Texas State University in San Marcos, Texas.

In 1982, Alexander was hired as a general sales manager at the then-American Broadcasting Company owned and operated station WRIF-FM in Detroit, Michigan. In 1984, he was promoted to vice president and general manager of WRIF-FM. Then, in 1986, Alexander helped organize an investor group that purchased WRIF from Cap Cities/ABC, while also serving as chief operating officer of Silver Star Communications in Detroit. From 1987 to 1989, he worked as station manager and acting general manager of KYW-TV in Philadelphia, Pennsylvania. From 1989 until 1999, Alexander served as vice president and general manager of Baltimore, Maryland’s WJZ-TV, where he expanded the local news, brought back the Baltimore Orioles broadcasts, and through a network affiliation change, sustained WJZ’s market dominance. In 1999, Alexander returned to KYW as vice president and general manager, where he served until 2002. While at KYW, he improved the station's news product, revitalized sales and strengthened its ties to the community.

In 2002, Alexander was named executive vice president of television for the National Association of Broadcasters. His responsibilities included growing TV's membership, as well as overseeing the Futures Summit, Small Market Exchange, account executive webcasts and key events and sessions at the NAB Show. In 2004, Alexander was named president of the National Association of Broadcasters Education Foundation (NABEF).

Alexander has served on the boards of numerous organizations, including the Baltimore Urban League, the Advertising Association of Baltimore, the Kennedy Institute, and the Advertising and Professional Club. He has been a member of the National Association of Black Journalists since 1987. Alexander has also received many awards and honors for his work. In 1991, he received both the Distinguished Black Marylander Award from Towson State University, and the Humanitarian Award from the Juvenile Diabetes Association. In 1994, his alma mater presented him with its Distinguished Alumni Award; and, in 1995, he received an honorary doctorate degree from Western Maryland College.

Marcellus Alexander was interviewed by The HistoryMakers on December 2, 2013.

See how Marcellus Alexander, Jr. is related to other HistoryMakers
Donate Now
Click Here To Explore The Archive Today!