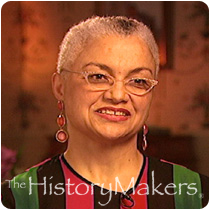 Funeral home director and community volunteer Marcella Boyd Cox was born in Cleveland, Ohio; she grew up in the city’s Glenville community, known both for its concentration of African American businesses, churches, and other institutions, and as the site of some of the nation’s worst racial unrest in the 1960s. Cox attended the Cleveland Public Schools and, as a student in a program for gifted and talented students, helped to integrate Collinwood Junior High School in the face of widespread and sometimes violent resistance by the majority white community. Cox later graduated from Cleveland’s Lutheran East High School.

Cox completed her undergraduate coursework at Baldwin-Wallace College and Cleveland State University before turning her attention to her family’s business, E.F. Boyd and Son, Inc. Funeral Homes, which served Greater Cleveland’s African American community for nearly a century. After becoming a licensed funeral director in 1988, Cox went on to serve as the vice president and manager for the family’s three funeral homes.

Cox became a well known figure in the community of funeral home directors and throughout the city of Cleveland. As a member of the Coalition of 100 Black Women Cox was actively involved in promoting activities that benefitted the African American community, such as educational programs on Sudden Infant Death Syndrome (SIDS). Cox also belonged to the Cleveland Chapter of Girlfriends, Inc.; The National Council of Negro Women; Jack and Jill, Inc.; the National Funeral Directors Association; the National Funeral Directors and Morticians Association; and the Advisory Board of the Love Center Interdenominational Church.

See how Marcella Boyd Cox is related to other HistoryMakers
Donate Now
Click Here To Explore The Archive Today!