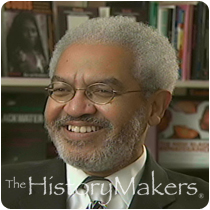 See how Manning Marable is related to other HistoryMakers
Donate Now

Author and director of the Institute for the Research in African American Studies at Columbia University, Manning Marable is one of America’s most widely read scholars. Born on May 13, 1950, in Dayton, Ohio, Marable received his A.B. degree from Earlham College in 1971, his M.A. degree in American history from the University of Wisconsin-Madison in 1972, and his Ph.D. in American history from the University of Maryland in 1976.

Marable’s academic career began in 1980 with a position as the senior research associate of Africana Studies at Cornell University. In 1982, Marable became a professor of history and economics, and Director of the Race Relations Institute at Fisk University. As a professor of sociology at Colgate University in 1983, Marable was the founding director of its Africana and Latin American Studies Program, and in 1987, he moved to The Ohio State University to become the Chair of the Black Studies Department. From 1989 to 1993, Marable served as the professor of Ethnic Studies at the University of Colorado at Boulder. In 1993, Marable became the founding director of the Institute for the Research in African-American Studies at Columbia University.

Since 1976, Marable has written Along the Color Line, a syndicated commentary series on African American politics and public affairs, which was published in newspapers and magazines in the United States, Canada, United Kingdom, the Caribbean, and India. Marable is a prolific author that has written over 200 articles in academic journals and edited volumes. Marable has also written over twenty books, including co-editing with Myrlie Evers-Williams The Autobiography of Medgar Evers: A Hero’s Life and Legacy Revealed Through His Writings, Letters, and Speeches, which was published by Basic Civitas Books in 2005. At the time of his interview, Marable had several books in progress, including one entitled Malcolm X: A Life of Reinvention, which is due to be published by Viking in 2009.

In 2002, Marable established the Center for Contemporary Black History at Columbia University, which produced Souls, a quarterly academic journal of African-American studies. In 2005, Marable and members of his Malcolm X Biography Project designed the content for the multimedia educational kiosks featured at the Malcolm X and Betty Shabazz Memorial and Educational Center at the historic Audubon Ballroom in Manhattan, the site of Malcolm X’s 1965 assassination.

See how Manning Marable is related to other HistoryMakers
Donate Now
Click Here To Explore The Archive Today!