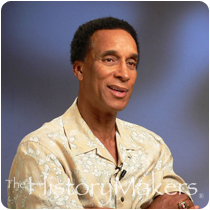 "This Too Shall Pass."

Basketball team owner and corporate executive Mannie Jackson was born on May 4, 1939 in Illmo, Missouri, to Emmett and Margaret Jackson. Jackson and his family moved to Edwardsville, Illinois, when he was three years old, where his father worked at an auto plant, and his mother and grandmother cleaned houses. In 1952, Jackson entered the newly integrated Edwardsville High School and later obtained a full scholarship to play basketball at the University of Illinois at Urbana-Champaign (UIUC). During the course of Jackson’s four years at UIUC , he and childhood friend Govoner Vaughn became the first African American basketball players to start for the university’s varsity basketball team. Despite the racist atmosphere on the University of Illinois' campus, Jackson became the first African American All-American player and the captain of the Illini basketball team.

After graduating from the University of Illinois at Urbana-Champaign in 1960, with his B.S. degree in education, Jackson traveled to New York to try out for the National Basketball Association (NBA)’s New York Knicks. Although Jackson did not make the team, within the same year, he was accepted into the Harlem Globetrotters, where he played until 1964. Jackson left the Globetrotters and settled in Detroit, Michigan where he attended graduate school at the University of Detroit, and obtained his M.A. degree in marketing and economics in 1968. From there, Jackson launched his business career, becoming the director of labor relations for the Honeywell Corporation in Minneapolis, Minnesota, where he worked for thirty years. Then, in 1986, Jackson co-founded The Executive Leadership Council and later became its president until 1992. In 1993, Jackson sought to invest money into the Harlem Globetrotters after the franchise reached a low fan base and sales, eventually becoming the owner and president of the team. His purchase of the Harlem Globetrotters made him the first African American to own a major international sports organization. Under Jackson’s leadership, the Globetrotters’ image was completely revamped, and the team amassed an impressive list of national sponsors, expanded the countries the team visited to 118 with attendance of over two million people annually, and topped the Sports Q ratings list as the most liked and recognized team in the world in 1999, 2000 and 2002.

For his work with the Harlem Globetrotters, as well as his impressive business history, Jackson has received numerous awards, including "Black Enterprise" magazine’s “Most Powerful Black Executives,” the National Conference of Community and Justice’s Humanitarian of the Year Award and the Effa Manley Sports Executive of the Year Award. From 1993 to 2007, Jackson served as the Chairman of the Board and Chief Executive Officer for the Harlem Globetrotters. He is Chairman of Boxcar Holdings, LLC , and he serves on the Board of Directors of the Harlem Globetrotters and as a trustee of the University of Illinois Foundation. Jackson was recognized by the Basketball Hall of Fame in Springfield, Massachusetts when the organization unveiled a new award named after him: Mannie Jackson Basketball's Human Spirit Award.

Mannie Jackson was interviewed by The HistoryMakers on July 15, 2007.