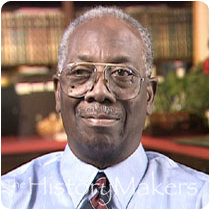 See how Manford Byrd, Jr. is related to other HistoryMakers

Educator Manford Byrd, Jr. was born on May 29, 1928 in Brewton, Alabama. He studied mathematics at Iowa Central College and graduated in 1949. He then pursued graduate work, earning his M.A. from Atlanta University in 1954 and his Ph.D. from Northwestern University in 1978.

Byrd has sat on the boards of directors of the Chicago State University Foundation, Joint Negro Appeal, the Mid-America Chapter of the American Red Cross, the Council of the Great City Schools, the Chicago NAACP and the United Church Board for World Ministries. He is a member of the Board of Trustees of Central College, Pella Iowa and the Adler Planetarium, Chicago. All together, he is a member of over 70 professional organizations.

Byrd has been the recipient of over 100 awards and commendations for excellence in teaching and academic administration, including honorary doctoral degrees from Central College, Hope College and the National College of Education. He and his wife, Cheribelle, have three sons.

See how Manford Byrd, Jr. is related to other HistoryMakers
Click Here To Explore The Archive Today!