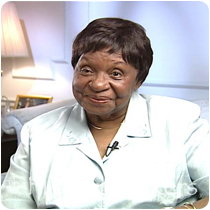 See how Malvyn Johnson is related to other HistoryMakers
Donate Now

Journalist and civil rights activist Malvyn “Mal” Johnson was born July 4, 1924, in Philadelphia, Pennsylvania. Johnson and her four siblings, Alice, Artie, Harvey and Norma, were primarily raised by their mother, Johnnie Reeves Taft, because their father left the family when Malvyn was still young; her mother would later remarry. Johnson attended Temple University, where she earned her B.A. degree while working to pay her own way through school as a riveter in the naval yards, among other jobs.

After graduation, Johnson began working for Veterans Affairs before moving on to become the program director for the local YWCA. Johnson soon married her husband, Frank Benjamin Johnson, whom she had known since she was twelve years old; the couple moved to California until the Korean War separated them, and Johnson was forced to return to her hometown. Because of her husband's service in the Air Force, Johnson and her husband traveled extensively beginning in the mid-1950s, including periods in Redding, England, Maine, and Wyoming. While traveling, Johnson began to teach.

Johnson returned to the United States to attend Springfield University in Massachusetts, where she received her M.A. degree in intergroup relations and community dynamics. Johnson’s husband tragically died at the Westover Air Force Base during the Vietnam War, and Johnson continued teaching. Prior to moving back to Philadelphia, Johnson got a job at the Philadelphia Inquirer as the assistant to the editor; at this time, she also became heavily involved in the Civil Rights Movement.

Johnson eventually left the Philadelphia Inquirer to work with the North City Congress, a Civil Rights organization in Philadelphia, where she worked for two years alongside such luminaries as C. Delores Tucker; she also served as a co-chair of the local NAACP chapter with Tucker. In 1964, Johnson became director of community affairs for WKBS-TV, and worked as the "Cash for Trash" girl. Johnson soon became a news anchor and wrote as a columnist for the Philadelphia Tribune.

In 1969, Johnson was offered a job at Cox Broadcasting Corporation in Washington, D.C. after Barbara Walters and Jim Vance, both close colleagues of Johnson, encouraged her to take the position; she stayed with this organization for twenty-seven years. Johnson was the first female reporter employed by Cox and became the second African American female White House correspondent. Johnson covered five different United States Presidents, as well as Capitol Hill and the State Department. In 1980, Johnson became the Senior Washington Correspondent and the National Director of Community Affairs. Johnson also served as a representative of the United Nations International Association of Women in Radio and Television. Johnson also helped to found the National Association of Black Journalists, and the National Broadcast Association for Community Affairs. In 2000, Johnson left Cox to create her own media consulting firm, Medialinx International.

Malvyn “Mal” Johnson passed away on November 7, 2007, at the age of eighty-five.

See how Malvyn Johnson is related to other HistoryMakers
Donate Now
Click Here To Explore The Archive Today!