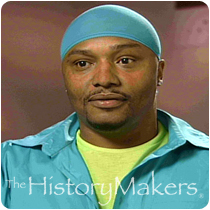 Spoken word artist Malik Yusef was born Malik Yusef Jones on April 4, 1971 in Chicago, Illinois. Yusef was raised on Chicago’s Southside in the neighborhood commonly referred to as the “Wild 100’s.” As a teenager, Yusef became a member of the Islamic street gang, the Blackstone Rangers. During this time, he also overcame his challenge with dyslexia.

Yusef began performing spoken word in open mic venues in the late 1980s. He had his first big break in 1997 when Ted Witcher, director of the film, Love Jones, recognized his poetry and hired him to coach the film’s lead actor, Larenz Tate. In 2002, Yusef along with jazz saxophonist Mike Phillips collaborated on the song “This Is Not A Game,” which was selected by Michael Jordan to appear on the CD that came with the purchase of limited edition Jordan 17 sneakers. That same year, he performed his poem entitled “I spit...” on the Grammy-winning second season of HBO’s Russell Simmons’ Def Poetry Jam.” He released his debut album in the compilation of The Great Chicago Fire; A Cold Day in Hell in 2003. Yusef has performed at “The Art of Love Tour” featuring Raheem DeVaughn and Chrisette Michele; the “Real Thing Tour” featuring Jill Scott & Raheem DeVaughn; “Touch the Sky Tour” featuring Kanye West & Keyshia Cole; the Carl Thomas & Mary J. Blige Tour; and the Glow in the Dark Tour featuring Kanye West. In 2007, Yusef collaborated with Director Frey Hoffman for the film adaptation of his poem “Hollywood Jerome.” Kanye West and Yusef released the album Good Morning & Good Night in 2008.

Yusef received a Peabody Award nomination in 2000 and was the Truth Award “Spoken Word Artist of the Year” from 2001 to 2005. In 2006, Kanye West’s CD, Late Registration, which featured Yusef’s poetry on the song “Crack Music” was awarded a Grammy Award. That same year, Yusef won an Independent Film Project Award for Hollywood Jerome. He was also awarded the “Best Poet” by the Chicago Music Awards from 2002 to 2008.

Yusef is the father of three children and resides in Chicago, Illinois.

Yusef was interviewed by The HistoryMakers on July 17, 2008.

See how Malik Yusef Jones is related to other HistoryMakers
Donate Now
Click Here To Explore The Archive Today!