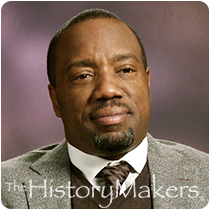 See how Malik Yoba is related to other HistoryMakers

Actor and youth activist Malik Yoba was born Abdul-Malik Kashie Yoba on September 17, 1967 in the Bronx, New York to Erutan Abdullah Yoba and Mahmoudah Young Lanier. He was raised as a Sunni Muslim in East Harlem. Yoba earned his high school diploma in 1989 from City-As-School in Manhattan, New York.

In 1983, Yoba began working at the Negro Ensemble Theatre in concessions, as an usher, and in other roles. He joined the City Kids Foundation, an arts-education focused youth leadership organization, in 1986, beginning as a volunteer and eventually becoming vice president of the Foundation in 1991. Yoba’s acting career began in 1989 with a small AIDS-education film called Seriously Fresh. In 1991, he landed a starring role in the Disney film Cool Runnings. In 1994, while making an appearance in an episode of Law & Order, Yoba auditioned for a new Fox television police drama called New York Undercover, receiving the lead role of NYPD Detective J. C. Williams. He and his co-star Michael DeLorenzo made history as the first cop-drama featuring actors of color in both leading roles. Yoba went on to star in several television series, such as Bull, Thief, Defying Gravity, Alphas, and Revolution. He also continued his film career, starring in movies like Smoke, CopLand, Soul Food, Why Did I Get Married? and its sequel Why Did I Get Married Too?, and Betty and Coretta. Yoba starred in the David E. Talbert play His Woman, His Wife in 2000, touring the country with the production. In 2011, he began teaching a course entitled “The Working Actor” at Long Island University’s Brooklyn campus. Yoba co-founded and launched iconic32, a lifestyle company and innovation studio, in 2014. That same year, he joined the cast of the Fox series Empire, starring alongside actor Terrence Howard.

In 1994, The New York Times named Yoba one of 30 young artists under the age of 30 who would change American culture in the next thrity years. Yoba was honored with three NAACP Image Awards for Outstanding Actor in a Drama Series in 1996, 1997, and 1998 for his work on New York Undercover. He founded the Malik Yoba Fatherhood Project in 2001, and Phi Beta Sigma Fraternity, Inc. inducted Yoba as an honorary brother in 2009.

Malik Yoba was interviewed by The HistoryMakers on December 9, 2014.

See how Malik Yoba is related to other HistoryMakers
Click Here To Explore The Archive Today!