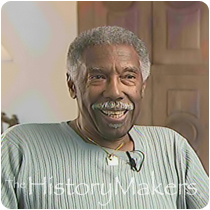 See how Malcolm Hemphill, Jr. is related to other HistoryMakers
Donate Now

Educator and sports official Malcolm Montjoy Hemphill, Jr., was born June 24, 1931, in Chicago, Illinois; his father was Third Ward Republican Committeeman and his mother played piano and organ for A.A. Rayner’s Funeral Home. Hemphill attended Forestville Elementary School, which at the time was the largest and most crowded grade school in the country. A basketball player and president of his class, Hemphill graduated from Wendell Phillips High School in 1949. At Fisk University, Hemphill played basketball with Wilson Frost, and was counseled by Dr. Billie Wright Adams; he later transferred to Arkansas AM & N where he earned his B.S. in health and physical education in 1953.

In 1954, Hemphill taught elementary physical education in the Chicago Public Schools, but was drafted in 1955, after which time he served in the United States Navy aboard the U.S.S. Hector. Returning to Chicago in 1957, Hemphill married Gloria Owens and became the son-in-law of Olympic great, Jesse Owens. At Marshall High School (1960 to 1973), Hemphill rose from teacher to assistant principal to acting principal for over 5,000 students; during this time he also coached basketball and baseball. Hemphill joined the rising chorus of Chicago’s black teachers who complained about the Chicago Public School’s (CPS) discriminatory promotion procedures. Earning his M.Ed. from Northeastern Illinois University’s Center for Inner City Studies in 1971, Hemphill became assistant principal at Manley High School and later Hyde Park High School. Until his retirement in 1997, Hemphill was coordinator of Physical Education Programs for the entire CPS.

Concerned that there were no African Americans officiating high school games in Chicago, Hemphill, with John Everett and Wilfred Bonner, formed the Metropolitan Officials Association (MOA) in 1962. MOA successfully trained and agitated for the assignment of black officials to referee CPS games. MOA went on to become the largest minority sports organization in the country, with alumni officiating at the NBA level. In 1974, Hemphill was one of the first three black officials assigned to a Big Ten Conference game; he officiated in the Big Ten for 15 years. Hemphill organized and trained the first group of African American women officials, and was director of the Nate Humphrey Memorial Officials Basketball Camp. Hemphill and his wife, Gloria, remained residents of Chicago, where they raised two daughters.

See how Malcolm Hemphill, Jr. is related to other HistoryMakers
Donate Now
Click Here To Explore The Archive Today!