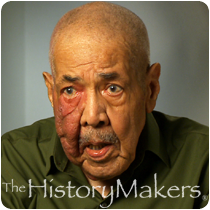 See how Maj. Walter Sanderson, Jr. is related to other HistoryMakers

U.S. Army Major Walter Sanderson, Jr. was born in Washington, D.C. on March 20, 1921 to Yale Manning Sanderson, a teacher, and Walter B. Sanderson, Sr., a chauffeur. His siblings include younger brother, John and younger sister, Vera. After graduating from Washington, D.C.’s Dunbar High School as an honors student and salutatorian in 1937, Sanderson enrolled at Howard University, where he was a member of the Army ROTC. He earned his B.S. degree at Howard in 1941 and was awarded medals from Howard University President, Mordecai Johnson at the ROTC Military Day drill competition. After graduating from Howard, Sanderson was hired by the United States Postal Service in mail distribution in 1941.

Sanderson joined the United States Army in 1942 and saw action in World War II as an infantry reservist with the 25th Infantry Regiment, 93rd Infantry Division, a segregated unit of the United States Army composed entirely of African American soldiers led by African American junior and white senior officers. In 1943, Sanderson’s unit began fighting in the Pacific Theater Campaign on Bougainville Island in the Solomon Islands Chain, near Guadalcanal Island, against Japanese forces. His unit performed combat patrols on other islands until combat on Morotai Island in 1945. In 1945, while serving on Morotai Island in Indonesia, Sanderson’s company was cited for bravery. Division patrols earned the distinction of capturing Col. Kisou Ouichi, the highest ranking Japanese prisoner of war in the Pacific. In 1944, Sanderson was promoted from 2nd to 1st Lieutenant in his unit, the 25th Infantry Regiment, 93rd Infantry Division. In 1952, Sanderson served with the 38th Infantry Regiment, 2nd Division in the Korean War (1950 – 1953), suffering a shell fragment wound in combat.

Included in Sanderson’s many accolades are a Purple Heart for wounds received in combat in the Korean War and two Bronze Star Medals for meritorious service. Sanderson was also the recipient of a United Nations Service Medal and Master Combat Infantry Badge. In 1965, after his 23 years in the military, Sanderson was hired as a systems analyst doing defense analysis for the U.S. Government, which earned him a nomination for National Civil Service League’s Career Service Award in 1971. Sanderson was a longtime member of the Veterans of Foreign Wars organization and the Second Infantry Division Association. Sanderson was married to late wife Juanita H. Sanderson. He has two adult children, Leslie Swift and Walter B. Sanderson III.

Walter B. Sanderson, Jr. was interviewed by The HistoryMakers on March 9, 2012.

See how Maj. Walter Sanderson, Jr. is related to other HistoryMakers
Click Here To Explore The Archive Today!