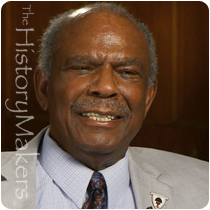 See how Maj. Gen. Nathaniel James is related to other HistoryMakers
Donate Now

Military Officer Nathaniel James is the former commanding General of the New York Army National Guard. Born on July 28, 1935, in the Branchville, South Carolina, his family migrated north to New York City during his childhood. James received early schooling in the New York City Public School system, and attended Theodore Roosevelt High School before graduating from Bronx Vocational High School. James then enrolled at the State University of New York, earning his A.A. degree in business and his B.A. degree in political science. After completing the ROTC training in college and subsequent two years of enlisted service, James was commissioned as a Second Lieutenant in 1959, through the Army Artillery and Missile School.

In addition to previously commanding the 369th Transportation Battalion James is the founder and president of both the 369th Veteran’s Association, Inc. and the 369th Historical Society, Inc. The 369th Regiment was originally called the 15th New York Infantry and they were the first African American regiment to engage in combat during World War II. After the war, 171 soldiers in that regiment were awarded the Croix de Guerre by the French Government, and German soldiers gave them the name, “Harlem Hell Fighters,” for the courage and valor they displayed in battle. James maintains hundreds of photographs and dozens of artifacts, papers, and other items to honor the legacy of the 369th Regiment.

Nathaniel James was interviewed by the The HistoryMakers on August 1, 2012.

See how Maj. Gen. Nathaniel James is related to other HistoryMakers
Donate Now
Click Here To Explore The Archive Today!