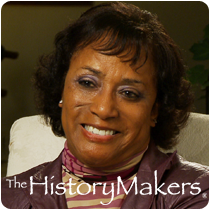 See how Maj. Gen. Marcelite Harris is related to other HistoryMakers

Major General Marcelite J. Harris was born in Houston, Texas on January 16, 1943 to Cecil O’Neal Jordan and Marcelite Terrell Jordan, Sr. Harris graduated from Kashmere Gardens High School before attending Spelman College in Atlanta, Georgia in 1960. After graduating from Spelman with her B.A. degree in speech and drama in 1964, Harris enrolled at Lackland Air Force Base for military training and then joined the Women in the Air Force (WAF) program. She also earned her B.S. degree in business management from the University of Maryland.

In 1990, Harris took the position of vice commander for the Oklahoma City Air Logistics Center at Tinker Air Force Base and later became the director of technical training at the Air Education and Training Command Headquarters at Randolph Air Force Base in Texas. In 1994, Harris was named director of maintenance at the U.S. Air Force Headquarters in Washington, D.C. Before retiring from the Air Force, Harris helped to establish a permanent office for the Committee on Women in the North Atlantic Treaty Organization (NATO), within its military committee.

Harris’s tenure with the Air Force saw her rise from the rank of Second Lieutenant in 1965 to Major General thirty years later, becoming the first ever African American Female General.
Harris joined the United States Alliance as Director of Operations Support and Logistics Processes in 1999. She also served a brief time as the chief of staff for New York Schools Chancellor Joel I. Klein. In 2010, Harris was appointed by President Barack Obama to serve as a member of the Board of Visitors for the United States Air Force Academy. She has been featured in Ebony and was the recipient of the Trailblazer Award by the Black Girls Rock Foundation. Harris is listed in many Who’s Who publications.

Maj. Gen. Marcelite J. Harris was interviewed by The HistoryMakers on March 21, 2012.

See how Maj. Gen. Marcelite Harris is related to other HistoryMakers
Click Here To Explore The Archive Today!