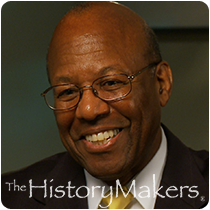 See how Maj. Gen. Clifford Stanley is related to other HistoryMakers
Donate Now

U.S. Marine Corps MajGen. Clifford L. Stanley was born on March 31, 1947 in Washington, D.C. After graduating from Theodore Roosevelt High School in 1965, Stanley enrolled in South Carolina State University and graduated with his B.S. degree in psychology in 1969. He went on to graduate with honors from Johns Hopkins University with his M.S. degree in counseling in 1977. In 2005, Stanley received his Ed.D. degree in education from the University of Pennsylvania. Stanley’s military education includes the Amphibious Warfare School (1978), the Naval War College (1983), the Marine Corps Command and Staff College (1984), and the National War College (1988).

Throughout his thirty-three year career, Stanley has served in numerous command and staff positions in the U.S. Marine Corps, including as commanding officer of M Company, 3rd Battalion, 8th Marines, commanding officer of Headquarters Company of the 4th Marines; commanding general of Marine Corps Air Ground Combat Center (MCAGCC) Twentynine Palms, California; and commanding general of the Marine Corps Base, Quantico, Virginia. In 1993 Stanley assumed command of the 1st Marine Regiment, Camp Pendleton, California, making him the first African American to command a U.S. Marine Corps Infantry Regiment. Stanley has also served in various assignments outside of the Fleet Marine Forces, including as psychology and leadership instructor at the U.S. Naval Academy; executive officer at the Marine Corps Institute; special assistant and Marine Corps aide for the Assistant Secretary of the Navy; and as a desk officer in the Office of the Assistant Secretary of Defense for East Asia and the Pacific Region in the Pentagon. In 2002, Stanley retired from the U.S. Marine Corps at the rank of Major General. He went on to serve as executive vice president of the University of Pennsylvania, and then as president of Scholarship America, Inc. Stanley was sworn in as the Under Secretary of Defense for Personnel and Readiness on February 16, 2010.

Stanley is a life member of Kappa Alpha Psi Fraternity, Inc., the South Carolina State University Alumni Association, the National Naval Officers Association, and the White House Fellow’s Foundation and Association. He also serves as a member of the Board of Deacons at Grace Baptist Church of Germantown in Philadelphia, Pennsylvania.

Stanley’s military honors include the Defense Distinguished Service Medal, the Legion of Merit Medal, the Meritorious Service Medal (2 awards), the Navy Commendation Medal, and the Navy Achievement Medal. His civilian awards include receiving the National Association for the Advancement of Colored People’s (N.A.A.C.P.) Meritorious Service Award, the N.A.A.C.P. Roy Wilkins Award, and the American Legion Award for Inspirational Leadership. Stanley also received Honorary Doctorate of Laws Degrees from Spalding University and South Carolina State University, and the Doctor of Science, honoris causa from the Medical University of South Carolina.

See how Maj. Gen. Clifford Stanley is related to other HistoryMakers
Donate Now
Click Here To Explore The Archive Today!