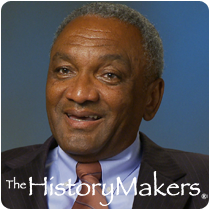 See how Maj. Gen. Alfred Flowers is related to other HistoryMakers

Major General Alfred K. Flowers was born on December 29, 1947 in Kinston, North Carolina to Annie Miller, a chef and Monroe Flowers, an industrial worker. He was raised by his grandparents who instilled in him a foundation of morals, ethical values and integrity. Flowers graduated from Jones High School in 1965 and enlisted in the United States Air Force at the age of seventeen.

After completing basic military training at Lackland Air Force Base (AFB) in San Antonio, Texas, Flowers was assigned as a supply warehouseman at Grand Forks AFB in North Dakota. In 1967, he served as an air transportation specialist in Da Nang AB, Vietnam. Two years later, Flowers was reassigned to Norton AFB in California, where he met his wife, Ida, who was also serving in the Air Force. After they married, she was transferred to Clark AFB in the Philippines and Flowers secured a joint-spousal assignment to be with her. In 1971, he was appointed to accounting specialist and served seven years in this position. Flowers received his A.A. degree from Thomas Edison University and his B.S. degree from Southern Illinois University. He earned his M.A. degree in 1976 from Ball State University. In 1978, he attended officer training school at the Medina Annex, Lackland AFB and was then commissioned as a Second Lieutenant. He served as a budget officer at several Air Force bases before receiving his M.S. degree from Industrial College of the Armed Forces in 1994. Flowers served as Chief of Budget at Headquarters ACC on Langley AFB and in1999, he served as director of Budget Programs for the Department of the Air Force. Flowers served as commander of the Air Force Officer Accession and Training Schools at Air University on Maxwell AFB and commander of the Second Air Force on Keesler AFB. In 2009, he was appointed as the deputy assistant secretary of budget in the Office of the Assistant Secretary of the Air Force for Financial Management and Comptroller in Washington, D.C. In 2012, after forty-six years of service, Flowers retired from the United States Air Force, making him the longest-serving airman in Air Force history and the longest serving African American in the history of the United States Department of Defense.

Throughout Flowers’ long career with the United States Air Force, he received much recognition including the Distinguished Service Medal, the Defense Superior Service Medal, Legion of Merit with oak leaf cluster and the Defense Meritorious Service Medal. Flowers served on the board of directors for the Army Air Force Exchange Service, the Air Force Aid Society and the Air Force Services Agency. Major General (R) Flowers was inducted into the Air Education And Training Command Order of The Sword on April 6, 2012, making him the 244th Air Force inductee since 1967. Flowers is married to Ida M. Flowers and they have one son, Lieutenant Colonel Alfred K. Flowers, Jr.

Alfred K. Flowers was interviewed by The HistoryMakers on June 28, 2012.

See how Maj. Gen. Alfred Flowers is related to other HistoryMakers
Click Here To Explore The Archive Today!