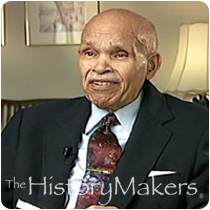 See how Mahlon T. Puryear is related to other HistoryMakers
Donate Now

Former deputy director of the National Urban League, Mahlon Puryear was born January 27, 1915, in Winston Salem, North Carolina. One of six children of a contractor, Puryear attended Columbian Heights High School, graduating in 1930 at age fourteen. He also received a diploma from Hampton Institute in 1936 and a B.S. in 1942 before earning a master’s from Columbia University Teachers College in 1948. He later studied at Colorado College in Greely, Colorado.

From 1936 to 1940, he was part owner with his father of Puryear and Sons Builders before teaching at Hampton Institute and Delaware State for three years. From 1943 to 1945 Puryear worked as personnel counselor for Wright Aero Company in New Jersey, when he left to work for the American Red Cross in Maryland and Okinawa. Puryear then went on to serve as a dean at Arkansas A.M.& N College from 1947 until 1951. That year, the National Urban League hired him, and he went on to hold twenty-five different titles including Director of the Southern Field Division. In 1957, Puryear left to direct Tuskegee Institute’s Technical Education Program in Indonesia. Returning to the Urban League after a year, Puryear was transferred to New York in 1962. By 1972, he was Director of the Economic Development Department with a staff of seventy-five persons and a budget of more than $30 million dollars. He opened new affiliates in Charlotte, North Carolina, and in Orange County California in 1982 and 1983, respectively. Primarily focused on education, Puryear worked along side Whitney M. Young and Vernon Jordan to bring opportunities to African American youth.

Retiring after fifty-three years of service, Puryear lives in Baltimore where he enjoys visits from his two daughters and grandchildren.

Puryear was interviewed by The HistoryMakers on November 15, 2003.

See how Mahlon T. Puryear is related to other HistoryMakers
Donate Now
Click Here To Explore The Archive Today!