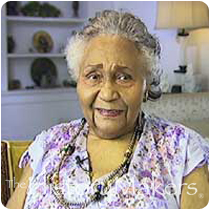 Favorite Color:
All Colors
Favorite Food:
Vegetables, Chicken
Favorite Time of Year:
Spring
Favorite Vacation Spot:
Anywhere
Favorite Quote:
Knowledge Will Forever Govern Ignorance. If You Wish To Be In Power, You Must Have Knowledge.

Favorite Color:
All Colors
Favorite Food:
Vegetables, Chicken
Favorite Time of Year:
Spring
Favorite Vacation Spot:
Anywhere
Favorite Quote:
Knowledge Will Forever Govern Ignorance. If You Wish To Be In Power, You Must Have Knowledge.

African American history was absent from the curriculum in Chicago’s public schools until Madeline R. Stratton Morris added it in 1941. She was born in Chicago on August 14, 1906, the oldest of six children, and spent her career making a mark on Chicago’s educational system.

Stratton Morris received her certificate in elementary school teaching from Chicago Teachers College and began teaching at Emerson School in 1933. She earned her B.S. degree in education from Northwestern University in 1941 and five years later received her M.S. degree from the same school. Stratton Morris also did post-graduate work at the University of Chicago from 1942 to 1946.

While working as a social studies teacher, Stratton Morris tackled several special assignments pertaining to curriculum, youth development and human relations. From 1958 to 1960, she served on the Human Relations Committee of the Chicago Board of Education. After leaving the public school system in 1968, Stratton Morris worked with several universities, teaching African American history at Mayfair College, supervising practice teachers at Chicago State University, and developing social studies curricula at Governors State University.

In addition to her dedication to education, Stratton Morris was active with several civic groups. She served as president of the Chicago chapter of the National Council of Negro Women, worked on the Mayor’s Commission on Human Relations and attended the 1980 Democratic National Convention as a delegate. The National Negro Museum and Historical Foundation, the National Council of Negro Women and Sigma Gamma Rho Sorority have all honored her for her service to education and community. Stratton Morris has also published three books on African American history, as well as several magazine articles.

Travel has been a lifelong passion of Stratton Morris. She island-hopped in the Caribbean, took a world tour of seventeen countries while on sabbatical in 1967, visited Mexico and traveled to the Soviet Union. Stratton Morris married twice. She was married to Samuel B. Stratton for twenty-six years until his death in 1972, and was married two and a half years to Walter Morris before he died in 1983.

See how Madeline Stratton Morris is related to other HistoryMakers
Donate Now
Click Here To Explore The Archive Today!