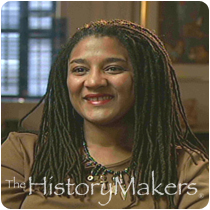 See how Lynn Nottage is related to other HistoryMakers

Playwright Lynn Nottage was born in Brooklyn, New York in 1964. At age eight, she had already written her first play. Her inspiration came from the women in her family. Her grandmother, mother, and other women were the nurses, teachers, activists and artists in the Brooklyn neighborhood where she grew up. Nottage is a graduate of New York’s High School of Music and Art in Harlem where she earned her high school diploma in 1982. That same year, she enrolled at Brown University where she received her B.A. degree in 1986. She continued her studies and received her M.F.A. degree in playwriting at Yale School of Drama in 1989.

Nottage became a full-time playwright in the 1990s after spending four years at Amnesty International as national press officer. Her first break came as a commissioned monologue for a musical entitled, A...My Name is Still Alice. In 1993, her short play, Poof!, about a woman whose husband spontaneously combusts premiered at the Actors Theater in Louisville, Kentucky, where it won the Heideman Award. In 1996, the Steppenwolf Theatre Company in Chicago, Illinois, produced one of her most known plays, Crumbs from the Table of Joy, in its family outreach series.

Nottage took a break from writing for nearly seven years, but in 2003, her drama Intimate Apparel, a play about an African American seamstress in turn of the century New York, won major awards including the New York Drama Critics Circle Award, the Francesca Primus Prize and the Steinberg Award. In 2004, actress Viola Davis won a Drama Desk Award for her outstanding performance in Intimate Apparel at the Roundabout Theatre Company in New York City.

Nottage’s plays are being produced the world wide. She continues to write in her Brooklyn home where she resides with her husband and daughter.

See how Lynn Nottage is related to other HistoryMakers
Click Here To Explore The Archive Today!