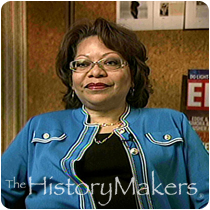 See how Lynn Norment is related to other HistoryMakers
Donate Now

Ebony Magazine Senior Staff Editor Lynn Aurelia Norment was born in Bolivar, Tennessee. Norment was born the third child in a family of nine to Alex Norment and Esther Morrow Norment. Her father was the owner of a local appliance sales and repair shop called Norment's Radio and T.V., and her mother worked as a licensed practical nurse at Western State Hospital. During her elementary school years, Norment attended the all black segregated school in Bolivar known as Bolivar Industrial Elementary. Norment went on to the vocational school where she was a member of the Beta Club and the school's newspaper staff. In 1969, the racial integration of Tennessee schools offered Bolivar's African American community the opportunity to transfer to the predominantly white Bolivar High School. Norment was amongst those who helped to integrate the high school. She graduated from Bolivar High School in 1970.

Later, in the fall of 1970, Norment attended Memphis State University where she received a full academic scholarship. Norment graduated magna cum laude in 1973 with her B.A. degree in journalism and then worked as an intern for the Memphis based newspaper, The Commercial Appeal. From 1973 to 1977, Norment was a general assignment reporter, religion editor and investigative reporter. In 1977, she went off to Chicago to pursue work as a freelance writer for Ebony Magazine. Ebony agreed to hire Norment and assigned her to write an update story on R&B singer Al Green. Norment followed Al Green for two days, without the use of a recorder or a notepad, to complete the story.

In 1991, Memphis State University honored Norment by recognizing her as one of its "Outstanding Journalism Alumni." A member of the National Association of Black Journalists (NABJ), Norment was chairperson for NABJ's 1997 Convention in Chicago which was attended by President William J. Clinton. In 2000, Norment was chosen as NABJ's chairperson for the association's 25th Anniversary. She now serves as NABJ's vice president and is on several of its committees. In addition, Norment is a board member of a Chicago based rehabilitation agency, Habilitative Systems, Inc.

Norment lives in Chicago, Illinois and serves as a member on the Editorial Board of Ebony Magazine. She writes and edits various columns for Ebony Magazine including "Sisterspeak," "Ebony Advisor" and "Money Talks."

Norment was interviewed by The HistoryMakers on February 6, 2008.

See how Lynn Norment is related to other HistoryMakers
Donate Now
Click Here To Explore The Archive Today!