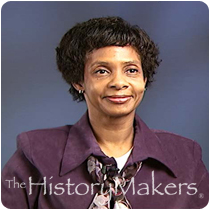 See how Lynn Carol Allen is related to other HistoryMakers

Tri-Star Gymnastics founder and multicultural education specialist, Lynn Allen was born October 22, 1951, in Nashville, Tennessee to educators, Richard and Ruby Stephenson. After having lived in Fort Chafee, Arkansas, the family moved to Chicago where Allen attended Copernicus, Burnside, and McDade elementary schools. Playing the piano and saxophone, Allen graduated from Harlan High School in June of 1969. At the University of Illinois at Chicago (UIC) Allen majored in secondary education and minored in physical education; in her junior year, she began taking tumbling and gymnastics classes and made the women’s gymnastics team.

Graduating in June of 1973, Allen began teaching history at Chicago’s Unity High School; at the same time, she also started a gymnastics club. Allen went on to open Lynn Allen’s Gymnastics Center on July 5, 1977, to train children between the ages of 2 and 18; over time, the program moved from a tiny storefront to a larger warehouse space on Chicago’s South Side. Allen’s gymnastics school was featured in several local newspapers, including The Chatham Citizen, the April/May 1982 issue of Dollars and Sense magazine, and on the television news magazine Two on Two with Harry Porterfield in 1981 on WBBM Channel 2 in Chicago.

In 1983, the program moved to the Oak Park, Illinois, recreation department. In September of 1988, Allen’s Tri-Star Gymnastics, Inc. was established as a completely independent non-profit organization and moved to a 7,200 square foot warehouse; five years later the program moved to Forest Park. Tri-Star Gymnastics remains a culturally diverse program that serves some 800 children per week from Oak Park, Forest Park, River Forest, Maywood, Cicero, Berwyn and throughout the Chicago Metropolitan area.

Allen later returned to college to earn her M.A. degree in school leadership in 2003, and became the Director of Multicultural Education for Oak Park School District 97 in November of 2003.

See how Lynn Carol Allen is related to other HistoryMakers
Click Here To Explore The Archive Today!