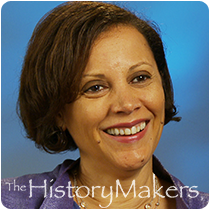 See how Lyne Pitts is related to other HistoryMakers
Donate Now

Television executive and journalist Lyne Johnson Pitts was born on December 12, 1954 in Washington, D.C. She attended the Emma Willard School in Troy, New York, and graduated from Stanford University with her B.A. degree in communications in 1976.

Upon graduation, Pitts was hired as an editor for the Ravenswood Post in East Palo Alto, California. From 1977 to 1978, she worked as a writer at KPIX-TV, the CBS owned station in San Francisco. Pitts went on to serve as a writer and producer at KTLA-TV from 1978 to 1980 and at CBS’s KNXT (now KCBS-TV) from 1980 until 1984. She was then hired by CBS News in 1984 as a broadcast producer for the CBS Morning News. She served as a producer for CBS News Sunday Morning and the CBS News weekend broadcasts in 1987, and then as senior producer and producer of 48 Hours from 1987 to 1996. In 1996, Pitts was named executive producer of "The Class of 2000", a four-year ongoing project of CBS News. During this period, she also served as executive producer of "Before Your Eyes," a series of critically acclaimed CBS News primetime specials. Pitts was then appointed as executive producer of the CBS Evening News weekend broadcasts in 1997, and was promoted to executive producer of CBS’s The Early Show in December 1999. In 2003, she moved from The Early Show to senior broadcast producer of CBS Evening News with Dan Rather.

Pitts left CBS News in 2004 and was hired as executive producer of NBC News’ Today, Weekend Edition in February of 2006. In 2007, Pitts was named vice president of strategic initiatives for NBC News, where she worked until 2009. Then, after briefly serving as head of U.S. operations for Nduka Obaigbena’s Arise News, she was named The Root’s interim managing editor in September of 2013. She took on the permanent role of The Root managing editor in February of 2014. Pitts also serves as chief executive officer of BLP Productions LLC and of Maltese Productions, Inc.

Her honors include several national Emmy Awards and the Silver Gavel Award from the American Bar Association. She is married to ABC News chief national correspondent Byron Pitts. Together they have six children.

Lyne Pitts was interviewed by The HistoryMakers on June 19, 2014.

See how Lyne Pitts is related to other HistoryMakers
Donate Now