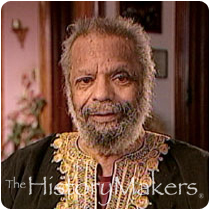 Called the godfather of Chicago black political activism, Lutrelle Fleming "Lu" Palmer, Jr. was born March 28, 1922, in Newport News, Virginia, to Myrtle and Lutrelle, a school principal. While his two older sisters opted for careers in education, Palmer became a journalist when he arrived in Chicago in 1950 with a Ph.D. from the University of Iowa. "The Panther with a pen" spent fifty years galvanizing and informing the black community as a reporter, syndicated columnist, newspaper publisher and radio commentator. From 1983 until his retirement in 2001, Palmer hosted an issues-oriented talk show.

Palmer came to Chicago in 1950 as a reporter for the Chicago Defender. He wrote for other newspapers, including the Chicago Daily News, where he also served as a syndicated columnist and editor for the Nashville, Tennessee, based Tri-State Defender. He founded the Black X-Press Info-Paper in Chicago. He was a recruiter, organizer and preceptor for the Associated Colleges of the Midwest from 1970 to 1990.

Sometimes Palmer's positions caused him to quit or lose a job. Illinois Bell canceled its sponsorship of Palmer's twelve-year old radio show in 1983 when he became an outspoken supporter of Harold Washington, who, with Palmer's help, became Chicago's African American mayor. As a community activist, he founded the Chicago Black United Communities in 1979, the Black Independent Political Organization in 1981, and served as chairman of the Extended Services Program for the Group Living Facilities for Boys in 1998-all of which are still in existence.

Palmer received a journalism degree from Virginia Union University in Richmond, Virginia in 1942 and a master's degree from Syracuse University in 1948. He and his wife, Jorja English Palmer, lived in Chicago's South Side. They have seven children. Palmer passed away on September 12, 2004.