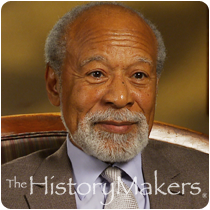 See how Luther Williams is related to other HistoryMakers

Biologist and academic administrator Luther Williams was born on August 19, 1940 in Wedgeworth, Alabama to Mattie Wallace Williams and Roosevelt Williams, the third of nine children. Williams grew up fascinated by living systems and was encouraged by his fifth grade math and science teacher to pursue his interest in science. After graduating from Hale County Training School in Greensboro, Alabama, Williams attended Miles College, earning his B.S. degree in biology in 1961. Two years later, Williams received his M.S. degree from Atlanta University, where he studied under Dr. Mary Logan Reddick. Williams was awarded an NIH pre-doctoral fellowship to study at Purdue University in 1966, enabling him to work with Dr. Frederick C. Neidhardt and earn his Ph.D. degree in molecular biology in 1968.

In 1984, Williams was named the president of Atlanta University. He then served as the chair of the White House Biotechnology Science Coordinating Committee, the deputy director of the National Institute of General Medical Science of the National Institutes of Health, and assistant director of education and human resources at the National Science Foundation. After serving as the William T. Kemper Director of Education and Interpretation at the Missouri Botanical Garden from 2001 to 2005, Williams was invited to join the faculty of Tuskegee University as the dean of graduate studies and research and then provost and vice president of academic affairs. He was subsequently reappointed to provost and vice president for academic affairs at Tuskegee University in 2010.

Williams has been recognized for his leadership and his dedication to creating opportunities for minorities in the sciences. He received the Presidential Distinguished Executive Rank Award by President Clinton in 1993. He was also named distinguished alumnus of the School of Science, Purdue University in 1997. In addition, he received the William A. Hinton Research Training Award from the American Society for Microbiology in 2000, and a number of honorary doctorate degrees. He has contributed to over seventy academic papers and professional scientific journals and more than twenty articles concerning the status of science education in the United States. He was also named one of the fifty most important Blacks in science research by Spectrum magazine in 2005, and was appointed a member of the Council of Councils, Office of the Director, the National Institutes of Health in 2009.

Luther Williams was interviewed by The HistoryMakers on April 11, 2011.

See how Luther Williams is related to other HistoryMakers
Click Here To Explore The Archive Today!