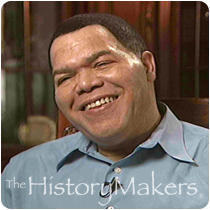 See how Luther "Badman" Keith is related to other HistoryMakers

Journalist Luther Alton Keith was born on October 9, 1950 in Detroit, Michigan to Mittie Savella Ashworth and Luther Caesar Keith. Keith’s father was a postal employee who founded the United Committee on Negro History. Keith attended Sampson and St. Agnes elementary schools. He graduated from Cathedral High School in 1968. He then studied at the University of Detroit, where he was mentored by Mary Helen Washington and graduated with a B.A. degree in journalism in 1972.

Hired by The Detroit News in 1972, Keith served as a general assignment reporter before becoming a sportswriter in 1973. In 1979, Keith worked as the state capital bureau correspondent specializing in economic and budget issues and writing periodic columns on state legislative issues. He was also a frequent commentator on the “Off The Record” television program. Keith was appointed assistant city editor in 1982 where he directed local coverage in the criminal courts and directed a five-person news team.

Taking a two year leave of absence, Keith served as founding director of Wayne State University’s Journalism Institute for Minorities from 1985 to 1987. He returned to The Detroit News as Assistant City Editor in 1987 and Night City Editor in 1988. From 1988 to 2005, Keith worked in a number of positions for The Detroit News, including features writer, copy editor, business editor, assistant managing editor, public editor, senior editor and columnist. Keith was the recipient of the Distinguished Faculty Award from Wayne State University in 1987 and the Ameritech Living the Dream Trailblazer Award in 1999, Keith became the youngest person ever to be inducted into the Michigan Journalism Hall of Fame in 1995. In 1993, Keith created On Detroit, a weekly grassroots mini newspaper that ran until 2003. He was honored with the Excellence in Urban Media Award from the Detroit Chapter of the National Association of Black Journalists in 2001 and Wayne State’s Helen Thomas Diversity in Journalism Award in 2005.

Keith and his wife, Jacqueline, have one child, Erin.

Keith was interviewed by The HistoryMakers on March 9, 2007.

See how Luther "Badman" Keith is related to other HistoryMakers
Click Here To Explore The Archive Today!