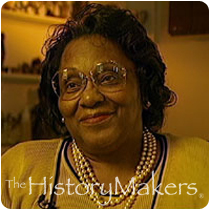 See how Lula Cole Dawson is related to other HistoryMakers

Lula Cole Dawson was born on April 15, 1931, in Jonesboro, Louisiana. After graduating from high school, Dawson earned an A.B. degree in sociology and counseling in 1952 from Southern University in Baton Rouge, Louisiana. She then interned at Andover Newton Seminary in Andover, Massachusetts. In the fall of 1952 she began graduate studies in sociology at Boston University, where she earned her master’s degree in 1953.

Dawson began her career in 1954 working as the director of student activities at the student center of Southern University. In 1958, Dawson was hired as an interviewer with the Employment Security Commission in Raleigh, North Carolina, where she worked until 1960. Between 1960 and 1972, Dawson traveled with her husband, diplomat Horace Dawson, and was involved in a number of volunteer projects throughout Africa. She sponsored galas to benefit orphanages and organized a craft shop for young girls in Nigeria. She partnered with Victoria Tolbert, wife of the president of Liberia, to build a hostel for young women and organized a self-help program for mothers of children at Mulago Hospital in Uganda.

Dawson returned to the United States with her husband in 1972, and was hired as a field coordinator by the Tennessee State University Training Coordination Center to help identify and train teachers who had been displaced by the desegregation of Tennessee schools. Two years later, she was hired as a consultant to the D.C. Citizens for Better Public Education, where she focused her efforts on providing better educational opportunities for the disadvantaged. Returning overseas with her husband, Dawson served as chairman of the organizing committee of the Friends of the Cultural Center of the Philippines from 1977 to 1979. After her husband’s appointment by President Jimmy Carter as the ambassador to Botswana, Dawson became honorary chairperson of the Child-to-Child Foundation of Botswana and chairperson of the First Lady’s Charity Ball in Botswana.

After returning from Africa, Dawson worked as a consultant for the Washington, D.C. Public School System, the Department of Health and Human Services, St. Augustine’s College International Studies and Foreign Language Learning program and the State Department’s Agency for International Development. She served on the board of the Friends of the Museum of African Art and was presented with the Republic of Botswana Award for Outstanding Public Service. Dawson passed away on January 14, 2004 at the age of 72.


See how Lula Cole Dawson is related to other HistoryMakers
Click Here To Explore The Archive Today!