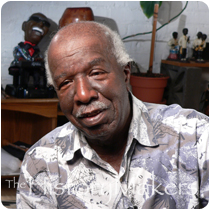 Percussionist Luigi Waites was born Lewis Waites, on July 10, 1927, in Omaha, Nebraska. Waites’ mother, Ione Lewis, married his stepfather, Grant Wallace, after Wallace’s arrival in Omaha in the 1940s. Waites attended Omaha’s Lake Elementary, Central High School and graduated from Technical High School. He also attended the Midwestern Conservatory of Music. Waites began performing music while he was still in high school. At the onset of World War II, more Americans enlisted into the U.S. military, and Waites was limited to playing with musicians his own age. Dropping out of Omaha Technical High School, Waites was drafted in 1945. While in the services, Waites was taught to play drum licks by the great Elvin Jones at Camp Lee, Virginia. It was not until the end of the war that Waites began touring locally with adult musicians.

In 1947, Waites returned to Omaha and continued his career as a local musician. In addition, Waites toured regionally, performing in Iowa, North Dakota, Kansas and other parts of Nebraska. After briefly attending school in California in 1949, Waites enrolled at the Midwestern Conservatory of Music in downtown Chicago; that following year, he married Eva Jean Little. In the 1950s, Waites continued his career in music, but also worked daily at local factories. After working as stock personnel for the Omaha National Bank, Waites began teaching private lessons to aspiring artists. In the 1960s and 1970s, Waites was the organizer of a youth group called the Contemporaries which performed as a marching band for local and regional events.

Waites was the first jazz instructor in the Omaha Public Schools and at Creighton University. Waites also helped found Phyllis Hicks’s “Steppin Saints.” Waites was named Nebraska Arts Council’s Artist of the Year in 1996; he is still playing and teaching, while enjoying his eighties. Waites, who toured internationally and performed in Europe during the 1990s, lived in Omaha, Nebraska and had six grown children.

Luigi Waites was interviewed by The HistoryMakers on October 7, 2007.