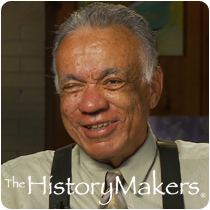 See how Lucius Walker is related to other HistoryMakers

Mechanical engineer, engineering professor and education administrator Lucius Walker was born on December 16, 1936 in Washington, D.C. to Inez, a housewife and M. Lucius Walker, Sr., a public school teacher. After attending Armstrong High School for one year, he received a Ford Foundation scholarship to attend Morehouse College at the age of fifteen. In 1954, he transferred to Howard University to study engineering. Walker graduated with his B.S. degree in mechanical engineering in 1957. He continued his studies at Carnegie Institute of Technology (now Carnegie Mellon University), earning advanced degrees in mechanical engineering, his M.S. degree in 1958 and his Ph.D. degree in 1966. During his studies, he served as an instructor at Howard University and Carnegie Institute of Technology.

In 1963, Walker joined the faculty of Howard University as an assistant professor in the Department of Mechanical Engineering; in 1967, he was promoted to an associate professor and in 1970, he became a full professor. A year later, he became chair of the department of engineering. In 1972, Walker co-founded and directed the Engineering Coalition of Schools for Excellence in Education and Leadership and co-founded the organization, Advancing Minorities' Interest in Engineering. In 1976, Walker became acting dean of the School of Engineering and a graduate professor of mechanical engineering. He was appointed dean in 1978. Throughout his career, Walker also worked for General Electric, Exxon, Ford Motor Company, and Harry Diamond Laboratories. He published many scientific research articles covering topics such as transportation systems analysis, fluid mechanics, and bioengineering. Walker also conducted aerodynamics research using airplane models and holds a patent on a Fluidic NOR device. Lucius Walker retired as dean in 2002 and became a professor emeritus at Howard University.

Walker has been recognized many times throughout his career including receiving the 2008 Distinguished Alumni Award from Howard University. He served on the board of directors of Carnegie Mellon University; Junior Engineering Technical Society and the Center for Naval Analysis, as well as MIT’s Visiting Committee of the Department of Electrical Engineering and Computer Sciences. Lucius Walker has two children and six grandchildren.

Lucius Walker was interviewed by The HistoryMakers on July 14, 2012.

See how Lucius Walker is related to other HistoryMakers
Click Here To Explore The Archive Today!