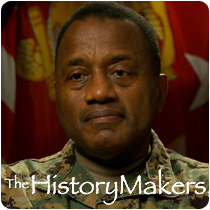 See how Lt. Gen. Willie Williams is related to other HistoryMakers

U.S. Marine Corps Lt. Gen. Willie Williams was commissioned into the U.S. Marine Corps in May of 1974 after graduating with his B.A. degree in business administration from Stillman College in Tuscaloosa, Alabama. Williams also received his M.A. degree in business administration from National University in San Diego, California in 1992 and his M.A. degree in strategic resources management from from the Industrial College of the Armed Forces in 1994. He is also a graduate of the Armed Forces Staff College and the Amphibious Warfare School.

Williams began his career with the 11th Marine Artillery Regiment, serving first as a battalion supply officer and then as the regimental supply officer. In October 1977, Williams was assigned to the 3rd Force Service Support Group based in Iwakuni, Japan. After serving in Iwakuni, Williams returned to the U.S. for duty at the Marine Barracks at North Island, San Diego, California. While there, Williams served as the detachment supply officer and barracks executive officer. In June 1982, he reported to Quantico, Virginia for duty as platoon commander in the Officer Candidate School. In 1988, Williams deployed as the logistics officer with the Contingency Marine Air Ground Task Force 3-88 during its Persian Gulf Deployment. He was assigned to joint duty with the Department of Defense Inspector General’s Office in January 1990. Williams was appointed as commander of the 31st Marine Expeditionary Unit Service Support Group from 1994 to 1996. In June 1997, Williams departed for duty in Okinawa, Japan with the 1st Force Service Support Group. Initially, Williams was assigned as the assistant chief of staff; but, in 1998, he was promoted to commanding officer of the Brigade Service Support Group. He returned to Okinawa, Japan in 2000 as the commanding general of the Marine Corps Base at Camp Smedley D. Butler, and then as as the commanding general of the 3rd Force Service Support Group. From 2003 to 2005, Williams served as the assistant deputy commandant of Installations and Logistics at the U.S. Marine Corps Headquarters. In 2011, Williams became the director of the Marine Corps staff at Marine Corps Headquarters, making him third in the chain of command for the entire Marine Corps, behind only the commandant and the assistant commandant.

Lt. Gen.Willie Williams was interviewed by The HistoryMakers on February 11, 2013.

See how Lt. Gen. Willie Williams is related to other HistoryMakers
Click Here To Explore The Archive Today!