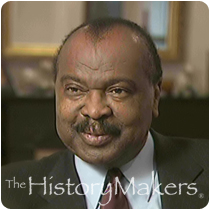 See how Lt. Gen. Joe N. Ballard is related to other HistoryMakers

Retired Commanding General of the U.S. Army Corps of Engineers and entrepreneur Lieutenant General Joe Nathan Ballard was born on March 27, 1942 in Meeker, Louisiana. The son of sharecropper parents, Ballard grew up in Oakdale, Louisiana where he attended Allen Parish School for Colored Youth. As a child when his mother told him that his father was not able to read, it became Ballard's mission to teach his father to read. He read his father the Bible until 1960 when he went away to college. Ballard attended Southern University in Baton Rouge, Louisiana, majoring in electrical engineering. He graduated in 1965 and joined the U.S. Army Corps of Engineers. Ballard went on to earn an M.S. degree in engineering management from Missouri University of Science and Technology in 1972. He also graduated from the Engineer Officer Basic and Advanced Courses, the Army Command and General Staff College and the Army War College.

Ballard started his career in the U.S. Army while still in college, working with the advanced ROTC program at Southern University. When Ballard graduated in January of 1965, he immediately joined the U.S. Army as a second lieutenant and was assigned to the U.S. Army Corps of Engineers. He was one of very few African Americans assigned to that unit. While in the U.S. Army, he served two tours in the Vietnam War, first, as platoon leader of the 84th Engineer Battalion. He, then attended the Engineer Officer Advanced Course and served as commander of Company C, 864th Engineer Battalion, and then chief of Lines of Communications Section Operations of the 18th Engineer Brigade. Between 1993 and 1995, Ballard served as Commander of the U.S. Army Engineer Center at Fort Leonard Wood, Missouri. He, then, served as Chief of Staff for the U.S. Army Training and Doctrine Command. Subsequently, in 1996, Ballard made history by becoming the 49th Chief of Engineers for the U.S. Army, being the first African American to hold this position.

In 2000, Ballard retired from the U.S. Army. That same year, he became president and CEO of a business development company called the Ravens Group, LLC. In 2002, he founded TRG Construction, Inc., a general contracting firm, where he also serves as president and CEO.

Ballard is now retired from the military and resides in Davidsonville, Maryland.

See how Lt. Gen. Joe N. Ballard is related to other HistoryMakers
Click Here To Explore The Archive Today!