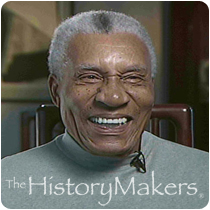 Marine Corps Lieutenant General Frank Emmanuel Petersen, Jr. was born on March 2, 1932 in Topeka, Kansas. His spelling of Petersen is popular amongst his paternal relatives in St. Croix, U.S. Virgin Islands. A maternal ancestor, Archie McKinney served in the 55th Regiment of Massachusetts Infantry during the Civil War. His parents, Frank E. Petersen, Sr., a radio repairman, and Edythe Southard Petersen, met at the University of Kansas. Petersen grew up in South Topeka and attended Monroe Elementary School, the gifted program of Boswell Junior High School, where his classmate was the former University of North Carolina head basketball coach Dean Smith. He graduated from Topeka High School in 1949. Briefly attending Washburn College, Petersen joined the United States Navy in 1950. He entered the Naval Aviation Cadet Program in 1951 and in 1952 after finishing flight training as the first black Marine aviator, was commissioned a second lieutenant in the United States Marine Corps (USMC). Petersen later received his B.A. degree in 1967 and his M.A. degree in international affairs in 1973, both at George Washington University. He also graduated from the National War College in 1973.

Assigned briefly to El Toro, California, Petersen was assigned to Korea in 1953. There, he flew Chance Vaught F4U Corsairs on 64 combat missions with Marine Fighter Squadron 212 out of the K-6 Airfield in Pyong-Taek to the Yalu River. He earned the Distinguished Flying Cross and six air medals. In the 1960s, Petersen experienced the transition from propeller driven fighters to jets like the Lockheed T-33B Seastar, the Gruman F9F Cougar and the Douglas F3D Skynight. In 1968, Petersen became the first African American to command a squadron when he took over Marine Fighter Attack Squadron 314 (VMFA-314), the Black Knights, in Vietnam. VFMA-314 received the 1968 Hanson Award for best squadron in the USMC. Shot down but rescued in the DMZ, Petersen added 250 combat missions to his Korean total. He eventually commanded a Marine Aircraft Group and a Marine Aircraft Wing. In 1975, Petersen took command of Marine Air Corps 32 at Cherry Point, North Carolina and in 1979 became the first African American General in USMC history. Petersen was made Lieutenant General in 1986 and was appointed Commanding General of the USMC Combat Development Command at Quantico, Virginia. When he retired in 1988, Petersen was the first black three star general in the USMC and the “Silver Hawk” and “Gray Eagle” senior and ranking aviator in both the USMC and the Navy. He was awarded still another Distinguished Service Medal for his command services at Quantico.

Petersen spent his civilian years as vice president of corporate aviation for DuPont DeNemours, Inc. Managing their corporate fleet, he traveled the globe, retiring in 1997.

Petersen was interviewed by The HistoryMakers on February 7, 2007.

Petersen passed away on August 25, 2015. He is survived by five children.