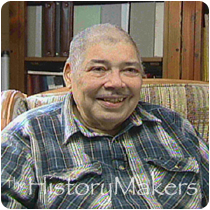 See how Lt. Col. Roger Walden is related to other HistoryMakers
Donate Now

A tool apprentice at Ford at the onset of World War II, Walden enlisted on December 7, 1942. Assigned to the 365th Infantry Regiment, Walden volunteered for the first black test platoon of 20 paratroopers. At Parachute School in Fort Benning, Georgia, Walden and fifteen others earned their parachute wings as the Sweet Sixteen in February of 1944, becoming the first African American paratroopers in United States military history. Promoted to sergeant in the 555th Parachute Infantry Battalion, Walden and his group were transferred to Camp Mackall, North Carolina. Walden received his commission as a second lieutenant of infantry in March of 1945 when he finished Officer Candidate School at Fort Benning. After receiving special training to combat Japanese balloon bombs at Camp Pendleton, Oregon, the 555th was soon deployed as Army fire jumpers. Shipped to Gifu, Honshu, Japan in 1949, Walden served as commander of Company A of the 24th Infantry Regiment, 25th Infantry Division of the Far East Command. In 1950, Walden as a captain commanded Company F in Pusan, Korea and he was made a Battalion S4 before being rotated back to the United States. Promoted to Major, Walden served in Europe from 1957 to 1960 with the 3rd Armored Rifle Battalion, 51st Infantry, 4th Armored Group.

Earning his B.A. degree in social studies from San Francisco State University under the Army’s Bootstrap Program, Walden was promoted to lieutenant colonel. He taught military science at Central State University until his retirement in 1966. Walden worked as manager of the City of Detroit’s Vacant Housing Rehabilitation Program until 1984.

See how Lt. Col. Roger Walden is related to other HistoryMakers
Donate Now
Click Here To Explore The Archive Today!