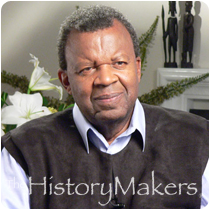 See how Lt. Col. Lucius P. Gregg is related to other HistoryMakers

Aircraft commander Lucius Perry Gregg, Jr. was born on January 16, 1933 in Henderson, North Carolina to Rachel and Lucius Gregg, Sr. Gregg graduated from Wendell Phillips High School in Chicago, Illinois in 1950 before receiving his B.S. degree from the U.S. Naval Academy as the fourth African American to graduate from there. He later received his M.S. degree in aeronautics and astronautics from the Massachusetts Institute of Technology in 1961.

In 1955, Gregg began his service in the United States Air Force, working as a pilot from 1956 to 1959. In 1961, he became the mission commander for the VIP Squadron at Andrews Air Force Base in Maryland. Also during this year, Gregg started working for the United States Air Force Office of Scientific Research as a project director in space technology where he worked until 1965. He subsequently became the Northwestern University Associate Dean of Science, and was promoted to the rank of major in the U.S. Air Force. In 1969, Gregg became Northwestern’s Alfred P. Sloan Fund program officer before moving to the First Chicago University Finance Corporation, assuming the role of president in 1972. In 1975, he graduated from the Advanced Management Program at Harvard University Business School; and, in 1979, he became vice president and director of National Public Affairs and vice president of governmental relations at Citibank/Citicorp. In 1985, Gregg served as vice president of public affairs for the New York Daily News before moving to Los Angeles upon being named vice president of corporate communications at the Hughes Aircraft Company/Hughes Electronics. In 1999, Gregg founded the Foundation for the Study of America’s Technology Leadership in Marina Del Rey, California. The foundation seeks to understand and raise awareness of the factors that led to America’s technology leadership—from the role of innovation to the assimilation of women and minorities into the technology leadership arena.

Gregg served on numerous technological and scientific boards including the Fermi (AEC) National Accelerator Laboratory, the Academic Board of the U.S. Naval Academy and the National Academy of Science Foundation Commission on Human Resources.

Gregg resided in Compton, California with his wife, Beverly.

Lucius Perry Gregg, Jr. was interviewed by The HistoryMakers on April 17, 2007.

See how Lt. Col. Lucius P. Gregg is related to other HistoryMakers
Click Here To Explore The Archive Today!