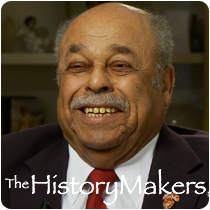 See how Lt. Col. Joseph Carpenter is related to other HistoryMakers

U.S. Marine Corps Lieutenant Colonel (Ret.) Joseph H. Carpenter was born on June 19, 1924 in Washington, D.C. Carpenter graduated from Cardozo High School in June of 1942. He briefly attended George Washington University from 1964 to 1966 where he studied liberal arts before earning a commission with the U.S. Marine Corps as a second lieutenant.

In May of 1943, Carpenter enlisted into the U.S. Marine Corps along with thousands of African Americans and completed basic training at the segregated boot camp at Montford Point Camp near Jacksonville, North Carolina. He was promoted to chief clerk in 1945 and became the first African American to be assigned duty at the U.S. Marine Corps Headquarters in Washington, D.C. Carpenter separated from the military in 1949 and worked as a civil servant in various government positions. In 1966, after briefly attending George Washington University, he re-entered the military and was commissioned into the United States Marine Corps as a second lieutenant. Carpenter was assigned as an officer with the 4th Civil Affairs Group and deployed during peacekeeping operations to Norway, Panama, and Puerto Rico, and Vietnam. Continuing to serve in data processing and other staff and clerical positions throughout his career, Carpenter rose to the rank of lieutenant colonel before retiring in 1986. In 1965, Carpenter was founding member of the Montford Point Marines Association, which was established to reunite veterans and active-duty Marines Corps personnel that trained at Montford Point Camp between 1942 and 1949. He is also a founding member of the Montford Point Marines Museum, which is housed at Montford Point Camp (now Camp Johnson).

See how Lt. Col. Joseph Carpenter is related to other HistoryMakers
Click Here To Explore The Archive Today!