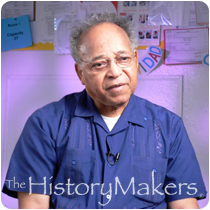 See how Lt. Col. Donald Campbell is related to other HistoryMakers

Academic administrator and lieutenant colonel Donald Russell Campbell was born on September 14, 1935 in Elizabeth, Louisiana to Luvenia and John Estes Campbell. Campbell obtained his A.A. degree from Phoenix College in 1956. Upon completion of Phoenix College, Campbell received his B.A. degree in history and political science with a minor in speech and Spanish from Arizona State University. After graduating from college, Campbell married Elizabeth Hosley on August 20, 1960, and he had two sons, Derek and Darren. In 1961, Campbell attended the University of Arizona School of Law before withdrawing from the program one year later. Campbell was also awarded his Ph.D. in education administration, business and economics from Arizona State University in 1980.

Campbell continued pursuit of his education and served in a variety of roles throughout his career. Starting as a broker and partner for Webb, Williams, and Berry Realty in Phoenix, Arizona, he worked from 1956 to 1964 and began his military service in Europe during the “Berlin Build Up”. In total, Campbell devoted twenty-eight years of service to the Arizona Air National Guard. After his military service in Europe, Campbell returned to the United States and worked for the City of Phoenix in the Human Resources Development Department from 1966 to 1969. There, Campbell became the Director of the Concentrated Employment Program, a jointly sponsored pre-employment training program between the U.S. Department of Labor, the Phoenix Urban League and the Arizona State Employment Office. In 1972, Campbell worked for Arizona State University as the Director of the Center for Services to the Disadvantaged, and later, in 1975, as the Director of Community Services, where he specialized in coordinating special interest courses for the entire Arizona State University service area.

In 1982, Campbell was also elected to the Maricopa County Community College District Board. During his twenty -five years of service on the Board, Campbell served as the Governing Board President in 1987, 1996, 2001 and 2005. He also was elected Governing Board Secretary in 1986, 1995, 2000, 2004 and 2007. Campbell pursued other endeavors including service on the Phoenix Aviation Advisory Board, the Consortium of Black Organizations for the Arts, and the NAACP.

See how Lt. Col. Donald Campbell is related to other HistoryMakers
Click Here To Explore The Archive Today!